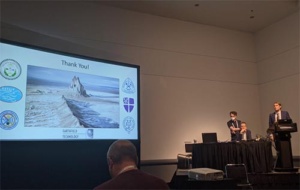 Thank you for your generosity with the awarding £356 from the Univ Old Members’ Trust Graduate Conference and Academic Travel Fund. This was used to cover my flights to and from the conference in Denver, Colorado, USA. Because of your generosity, I was able to present in person my latest PhD research, which highlighted a new predictive model for helium exploration based on the intersection of several structural features. I received feedback that spurred additional conversations which might lead to future research development. I was able to practice my public speaking skills as well as network with experienced professionals and other graduate students. I was also able to attend several interesting talks and poster sessions that directly pertain to my current research and interests pertaining to helium systems and natural hydrogen systems. It was such an amazing opportunity and I would not have been able to experience it fully without your generosity. Thank you!

Helium (He), a critical resource derived from the radioactive decay of U and Th in the subsurface, is an irreplaceable component in medical applications, science and engineering, nuclear power generation, and the aerospace industry. The occurrence of gas fields with economic He concentrations (>0.3%) requires tectonic and structural regimes favorable to concentrating He (originally produced in crystalline basement lithologies). We quantitatively test the correlation between high-He occurrences and structural features using a new high resolution geophysical aeromagnetic survey in the Four Corners region of the Colorado Plateau, USA. By combining magnetic data, gravity data, topography data, with magnetic and gravity depth profiles, several maps were created via Werner deconvolution algorithms: 1) depth to basement map with basement lineaments/faults, 2) igneous bodies occurrences (size and position), and a 3) flattened basement structural high map. After an extensive analysis, basement faults and igneous intrusive bodies were determined to be the most significant features influencing He accumulations. 88% of all high-He wells occur within 1 km of basement faults and 85% of He wells occur with 1 km of intrusions. As He values rise, the distance to these structural features decreases. Additionally, the influence of basement highs is confirmed to be significant as 88% of known He wells (>0.3%) occur within a structural high, and 91% of the remaining points are near (<1 km) intrusive bodies that could be acting as a local structural high. We present a composite map that acts as a predictive model based on a probability analysis that highlights the importance of targeting zones of intersection of basement faults and igneous bodies as well as incorporating the outline of major basement structural highs. Thus, this work, which utilizes new high-resolution geophysical data, provides ample evidence that the release, transportation, and accumulation of historical He gas occurrences in the subsurface are influenced by several structural features, namely, basement lineaments/faults, and igneous intrusions within zones of structural highs.