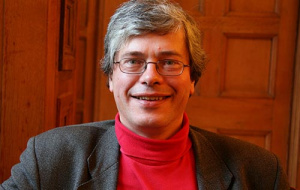 After almost 20 years of association with Univ, Frank Marshall is retiring from his post of Investment Bursar effective 18 February 2021.

Frank joined the College from Schroders, where he had worked in both their Banking Division and their Investment Division. In the late 1990s he took an interlude from that role to study for an MPhil in the History of Ideas at Gonville and Caius College Cambridge (his alma mater). Evidently having enjoyed his collegiate experience at Cambridge he responded to a job advert from Univ, where we were seeking a professional full-time Estates Bursar. Frank took up that role in 2001, initially shadowing Gordon Screaton who had served as Fellow Bursar before that.

Frank oversaw a number of significant projects in the College, including the (re)construction of the Boathouse, a joint property development project at Litchborough, the College bond issue (the first such in Oxford), and the acquisition of the Fairfield Nursing Home, which has provided the opportunity to create an expanded Univ North. For this latter project it was Frank’s keen eye for an opportunity, good local knowledge, and careful negotiations that allowed the College to greatly increase the footprint of its North Oxford holding.

Additionally, Frank has been the main steward of the College’s endowment from 2001, overseeing investments that performed well under his watchful eye. In this, he also benefited from the good counsel of many expert Old Members, who kindly served on the College’s Investment Committee.

Frank served on the Governing Body from 2001-2017 when he was Estates Bursar. In August 2017 he took on the new part-time role of Investment Bursar, in which his focus was the College’s investment portfolio, and maximising its ability to support the College’s academic mission. He leaves the College in a strong position, albeit now buffeted by the winds of coronavirus.

The College wishes to thank Frank for his many years of service, along with every happiness for the future, and looks forward to his continued association with the College following the Governing Body’s decision to elect him to an Emeritus Fellowship.

Lord Butler (Classics 1957, Master 1998-2008), and who recruited Frank to the College said: “I was hugely grateful to him for the skill with which he managed the College’s financial affairs during my Mastership and for the harmonious relations which he maintained not only with me but with the whole College community.”

Ivor Crewe (Master 2008-2020) said about Frank’s achievements in his 2017 tribute, when he moved from Estates Bursar to Investment Bursar: “As the tomb at St Paul’s says of Christopher Wren, Si monumentum requiris, circumspice – If you are seeking his monument, look around you.”

Ngaire Woods (Univ Fellow and Dean of the Blavatnik School of Government) said: “Frank’s contribution to Univ has been enormous. From the start, as Estates Bursar, he brought clarity and transparency to Univ’s finances, enabling the College to make informed decisions, and giving our supporters confidence in how we would steward our resources.”

John Deech, who worked with Frank and provided legal advice over most of his time at Univ said: “Frank selected a strong team of professionals to assist him, and I was extremely fortunate to be one of them. They included surveyors, land agents, investment managers, bankers and lawyers. We were all made to feel that we were equally important parts of a team and were encouraged to work with him and with one another in achieving the optimum result when faced with any particular problem.”

Hugh Stevenson (Law, 1961, and former member of the Investment Committee) said: “I very much enjoyed working with Frank when I was on the College’s investment Committee and he liked to discuss investment matters with me on an informal basis after I had stepped down. I admire him particularly for some exceptionally brave buying in the big market setbacks following the bursting of the tech bubble and the banking crisis. The College really does owe him a huge debt.”

James Anderson (History 1977, and current member of the Investment Committee) said: “I have real admiration for Frank’s skills and discipline. Unlike many, or indeed most, in capital markets he has repeatedly demonstrated the ability to understand when and where he and the College have an advantage over the noise of the markets. This has directly led to investment success and in a most delightful and constructive manner.”

On 12 January, while looking forward…