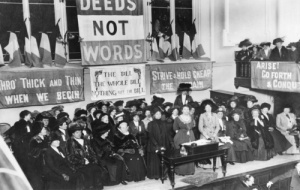 Univ is flying the banner of the Oxford Women’s Suffrage Society today, 14 December, to mark the centenary of the first general election in which British women were allowed to vote.

In 1917, 37 people associated with the University and public service in Oxford signed an appeal in favour of women’s suffrage, including a tutor from Univ. AJ Carlyle was a Lecturer in Political Philosophy and Economics, Chaplain of Univ and noted social reformer; he was elected to a fellowship at Univ in 1893 but had to vacate it in 1895 owing to his marriage to Rebecca Monteith Smith. He was elected an honorary fellow in 1935.

The Oxford Women’s Suffrage Society was formed in 1904 by Oxford dons, students and private citizens and campaigned tirelessly for votes for women. They, along 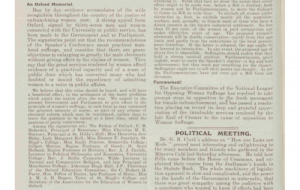 with the Student Society, participated in campaigns and protests including the Great Pilgrimage of 1913. The Great Pilgrimage was a six-week march ending in a rally in Hyde Park. Pilgrims marched through Oxford in July, joined in Summertown by local suffragists, two of whom carried the “heavy magnificent” OWSSWS (Oxford Women’s Students’ Society for Women’s Suffrage) banner.

The Women in the Humanities initiative commissioned illustrator Rachel Hill to recreate this banner, working from a sketch included in a newspaper article from The Oxford Times in 1908. They have also produced a downloadable pamphlet and timeline.

Last February, Univ flew the “Votes for Women” suffrage flag to mark 100 years since the Representation of the People Act – see our previous news item for details. The Act gave the vote to all women over the age of 30 who met minimum property qualifications and removing the previous restrictions on male suffrage. 5.6 million men and 8.4 million women were enfranchised by this act. Suffrage for all women on equal terms with men was only obtained in 1928, when the Conservative government passed the Representation of the People (Equal Franchise) Act.

Christmas is just around the corner…

Today marks 100 years since the Representation of the People Act…