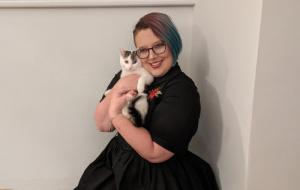 Hannah Capstick (2019, Music) has published an article on the music in the Five Nights at Freddy’s franchise in Sonic Scope (Goldsmiths, University of London).

Hannah argues that to move closer to an understanding of the specific ways in which music and sound contribute to the immersive experience we must probe into the terms that we use, our current theories and the mechanics thereof, and explore different methodologies across a range of genres and formats, to bring us closer to a more full understanding of these immersive processes, and why we seek them out and enjoy them. She concludes by suggesting a new idea – the “Global Music Box”: a new approach to the way in which we think of sounds in moving-image media, considering music and sound as equally important and mutually supportive, going as far as to break down the boundary between the two.

Her concept of the Global Music Box, as the name implies, seeks to treat all sounds in a game as part of the same system with the same goal. It steps outside distinctions between sound, music, interaction, and diegesis (the narrative of a game), and seeks to consider the individual characteristics of each sound, and how it relates to a network of other sounds and features that work towards creating a specific emotion and, in turn, an immersive (engaging) experience. This allows us to treat each case in a unique manner, allowing for the nuance of each game and its soundworld to be approached on its own terms.

Hannah Capstick is a third-year undergraduate student reading music at University College, Oxford, where she is President of the College Music Society. She is events director and editor for the Broad Street Humanities Review, a journal dedicated to publishing the works of undergraduate academics, where she is establishing a conference for aspiring academics to present their work. Her current research explores the impact of interactivity on music, diegesis and immersion, and how these change our understanding of sound and music in video games and film. She is also a keen performer, studying the flute at the Royal Academy of Music, managing and playing in the Oxford University Philharmonic Orchestra, as well as giving regular solo recitals and singing in the College Chapel Choir.

Hannah discussed how she became interested in music in gaming:
“I was in my first year when the pandemic hit. Studying from home meant that we did not sit our exams as usual, and instead I wrote a dissertation. We had done some work on music and multimedia in that term, and I noticed that game audio was significantly under-represented. Gaming is a relatively new industry that has grown significantly in the last decade, and thus its scholarship is also incredibly new – both my personal interest in video gaming and the opportunity to engage in such a new discipline made it an incredible dissertation topic.

“Our concepts are new, and still need refining and developing, which makes it incredibly exciting to work in! I have continued to engage with ludomusicology throughout the pandemic, researching topics such as the relationships and differences between film and game sound, the key roles music and sound play in creating the fictional world of a video game and immersing the player therein, and how game sound represents cultures and people. The ludo (scholarly) community has been incredibly welcoming and encouraging, and an excellent place to begin presenting my own academic work.”

You can read Hannah’s article online.

Ebenezer Azamati has been named…