Exploring the Highlands & Isle of Skye 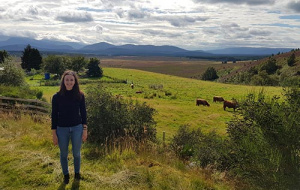 I’m sitting by the fire in our Air BnB in Scotland, where we are based for the next few weeks. It’s been a miserable day weatherwise, windy and rainy – a standard introduction to Scottish weather I imagine! We are staying in the loft of a couple’s house just outside of a town called Cawdor, about 20 minutes from Inverness, and quite close to a coastal town called Nairn. We jumped in the water this morning at Nairn – it was freezing, but a nice way to wake-up. I’ve booked in surf hire at Lossiemouth tomorrow morning, the closest beach with surf!

I enjoyed the train-ride up here – winding through the English and then Scottish countryside, looking out the window and watching the world go by. I started listening to this podcast called “Stories of Scotland”, hosted by two Scottish women who live in Inverness – one historian, and one adventurer/comedian/amateur geologist– who talk about various Scottish folklore and myths, often including a poem or ballad at the end. I’ve learnt a lot from the few episodes I’ve listened to so far – from the origins of Loch Ness monster, the illegal whisky Shebeen trade and the Highland clearances.

Today we went surfing at Lossiemouth – the surf was quite messy and difficult to get out the back to the break. I enjoyed it nonetheless – to be back in the ocean with waves relentlessly rolling in, battling over them on my surfboard, only to be hit by the next, and the next. We had thick wetsuits on and these surf booties – I had to take them off and opt for losing feeling in my feet, because they were too large and immediately ballooned full of water making it near impossible to stand up! I felt like I found a piece of home out there in the salt and seaspray. We drove home via Nairn and had fish and chips for lunch by the beach, which I think may become a regular activity. I went running this evening around the woodlands near us. It started raining while I was out, and I took my earphones out (interrupting another Stories of Scotland podcast, this time learning about the Sutherland goldrush – a rather gruelling tale of a goldrush lacking gold) to listen to it falling. I stopped to sit on the forest floor for a while, sinking into the purple heather that covered it – from here everything seemed more vivid – the green canopy above me, echoes of bird calls, a spider’s web to my right catching droplets of rain.

Yesterday we took the scenic route to Glenmore Forest, where we were planning on climbing Cairn Gorm, the mountain from which the Cairngorm National park gets its name. It was a lovely drive – winding roads as we slowly gained altitude, fields of wheat replaced by forest, interspersed with moorlands giving off a purple hue from the heather. A few hours into our walk to the base of the mountain the threatening clouds closed in and we got drenched (as we regretted substituting our hiking boots for regular joggers to save space!). We turned back once we reached what turned out to be the “Ski Base” of the mountain in winter, as the Munro itself was completely concealed in cloud and the rain showed no sign of retreating. On the drive home that evening we saw some Scottish wildlife to my excitement –  a badger (the first I have seen), an owl, some deer and a rabbit. Today we hired bikes and cycled from Inverness down to Loch Ness and around part of the Loch ¬– there is a bicycle/pedestrian path that connects it the whole way. I bought a small figurine of “Nessie” from the Loch Ness Monster Hunter who lives in a caravan next to the Loch – I read story he has laminated on a sign outside his place, about how he has been on a vigil looking for Nessie since 1991, after upping and leaving his job in England to pursue his childhood dream! It took me hours to light a fire this evening – I don’t have much practice being from Queensland, Australia, and it is true test of my patience!

On Friday we drove up north to a place called Drumnaguie (on the North west 500-mile route) – a tiny collection of white-washed crofting houses that overlook two beautiful white sand beaches. I was delighted to see that a house down the road from us had a sign outside it reading “Australia, 16, 776km, it’s a bloody long way!” (I concur).

On Saturday we walked over to Sandwood Bay, over coastal moorlands, with sheets of rain filing in reliably every half hour or so. Sandwood Bay was beautiful sandy beach whose shores merge into long green grass covering high sand dunes, which had fine marble like patterns painted by the wind on its exposed edges. Cliffs extended from each side down the coastline, and the surf was ferocious with a visible undertow and bits of debris being tossed about. We saved our swim from the sheltered Loch just adjacent to the beach! There were some ruins of an old crofter’s house (they are scattered everywhere across the Highlands), remnant of the Highland Clearances, where large portions of land where cleared of their inhabitants so they could be used for grazing animals. We were treated to an exquisite rainbow as we began our walk back. In the afternoon we checked out Smoo Cave in Durness, and the local chocolate shop, which we visited for a second time on our drive out yesterday.

Yesterday we spent the entire day driving the “North Coast 500 mile” circuit, all the way up to Dunnett head, the most northernly point of the mainland, and then back down the Eastern side to Inverness. We sat on the cliff edge at Dunnett Head for a while and watched the gulls riding the wind toward the rockface at breakneck speed, before abruptly shifting their weight and skidding to a stop, then freefalling gleefully downward. We had been hoping to see Puffins, which are known to inhabit the cliff edges there, but we were too late for them this year! The East coast was vastly different to the west – manicured fields and shingle beaches and a well-maintained 2 lane motorway. We stopped at a nature reserve an hour north of Inverness and watched the seals lounging around on submerged sandbanks, before heading back to Cawdor.

I’m sitting by yet another fire in our Air Bnb on the Isle of Skye, where we will be for the next week. We arrived late Saturday night after walking around Loch Affric en route – many Scottish people have recommended it to us, being one of the most beautiful Loch’s in Scotland! Its home to many Scots Pines, which are descendent of the native Caledonian Pines from the last Ice Age, but now only cover about 5% of Scotland. Today we went to Dunvegan Castle, the old stronghold of the MacLeod clan, and explored its beautiful gardens. After this we drove out to the most western point of the Isle, Neist Point and watched the Gannets put on a show, soaring around the cliff edges, and diving for fish. 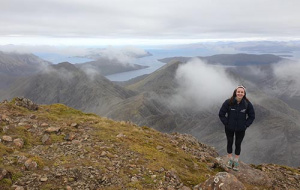 We woke to a thick fog with the rising sun concealed in it giving it a luminescent quality, but it has cleared to reveal the most beautiful bluebird day! We had the most wonderful week on Isle of Skye. We explored most parts on the Island we had hoped to – on Tuesday we drove North to the Trotternish Region, past Old Man Storr, up to Quiraing, a mountainous area with huge rocks of impossible sizes and shapes, culminating in a gold grass covered headland which seemed to extend into eternity.

The following day we climbed Bla Bheinn, a Munro that is part of the Cuillin mountain range in the South of the Island. We didn’t see another soul on the ascent, other than some agile sheep and circling crows. The view from the summit was incredible – a lonely windswept beach with the main Cuillin range rising beyond it, and winding streams through jigsaw pieces of earth. On our descent we saw some stags sprinting past us, on the other side of the valley and up the adjacent hills in a matter of seconds!

Today we are our way to Loch Ness for a couple of nights before heading home. Currently we are at Kylernea Otter Hide, on the look-out for otters. No luck so far!

We just walked up the top of the hill beyond our log cabin for sunset, in a small town on the banks of Loch Ness. The sky darkened and insects became louder, the dandelions taking on a dreamlike quality in the long grass and fading light. The sunsets are unassuming and quiet here in the hills. Although we had no luck with seeing any otters yesterday (although we saw plenty of seals), we have been spoilt with wildlife here – we have seen many red squirrels, lots of colourful birds and a family of badgers!

Tomorrow we take the train (several of them) back to Oxford. It’s been a wonderful few weeks up here – I’ve enjoyed being able to completely disconnect, to spend days in nature or reading and writing, learning about Scotland and its history, and reigniting my imagination and curiosity about a world that extends beyond my University degree in Oxford.

• If you are planning on doing any walks and having hiking boots, pack them!
• “Walkhighlands” is a really useful and informative website for planning any kind of walk or hike, regardless of how long!
• Train is a great way to reach Inverness, and there is public transport to nearby towns, and on Isle of Skye. We hired a car as this gave us more flexibility, especially with the current pandemic.
• Prepare for four seasons in one day – even if it starts raining, it’s likely to clear and you can persist with your plans!
• There are so many great bookshops up there and every BnB we stayed in had a bookshelf with a great selection, so no need to pack your own library.
• There is so much to do and see in Scotland! I’d prioritize quality over quantity and explore a smaller area thoroughly, rather than rushing from place to place if have the resources/time to do so.

My sincere thanks to University College and to the generosity of Mrs Kingman Brewster for this Brewster Scholarship – it has been an amazing opportunity and I feel incredibly fortunate, and would highly encourage other international students to apply.

From Shanghai to Henan