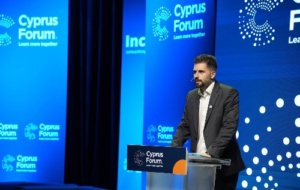 Nicolas Kyriakides (MSt in Law and DPhil in Law, 2011) was recently awarded the European Citizen’s Prize for an NGO he founded in 2012 called Oxygono and in particular, the Cyprus Forum and Nomoplatform, which aim to improve the policymaking process in Cyprus and the region.

Nicolas Kyriakides completed his DPhil at Oxford under the supervision of Adrian Zuckerman and is now Partner at Harris Kyriakides, a leading law firm in Cyprus. In addition to heading the firm’s Banking & Finance and Insurance Law Departments, Nicolas combines commercial practice with academic research, having been a Visiting Researcher at Harvard Law School with Professor David Rosenberg and lecturing regularly at the University of Nicosia. He also wrote Cyprus Banking Law with Nomiki Vivliothiki.

Oxygono is a non-governmental non-profit organisation established in 2014 and headquartered in Cyprus, consisting of individuals from a range of backgrounds including academics, social, political, and professional sectors. It aims to improve the quality of public debate in Cyprus and consequently the achievement of reforms and modernization of the country to improve the quality of life of citizens in all aspects of public life including health, economy, education, justice, foreign policy, research and entrepreneurship.

Cyprus Forum: a new, independent, ambitious and not-for-profit annual conference, bringing together local and foreign political leaders, important figures from the public and the private sector, the media, academia and civic society with the aim of initiating dialogue, exchanging ideas and finding new and creative solutions to key areas of public policy. Nomoplatform gives Cypriot citizens all the facts about pending bills and legislative proposals in Parliament via a free, widely accessible platform.

Find out more about Oxygono, the Cyprus Forum and Nomoplatform. You can also follow Dr Kyriakides on Twitter.

This month’s news in brief…

Dr Caroline Campbell has been appointed…

Welcome letters from the presidents 2022