Editor of History of Universities 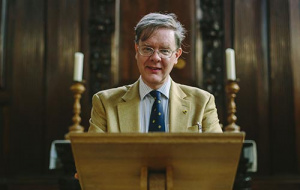 Dr Robin Darwall-Smith (1982, Classics), FSA, FRHistS, Univ’s Archivist, is now Joint General Editor of the Oxford Historical Society. He has also just accepted an invitation to become Editor of History of Universities, the leading English-language journal on the history of university education.

The Oxford Historical Society exists to publish archives, historical texts, bibliographical tools and studies about Oxford – the City as much as the University, its Halls and Colleges – and the neighbouring villages and towns in pre-1972 Oxfordshire. It seeks out suitable materials from all sources – academic, monastic, municipal, commercial, and institutional, as well as personal. To date, it has published nearly 140 volumes, including three edited by Robin.

History of Universities is a journal devoted to the study of every aspect of university history development, structure, teaching, and research from the Middle Ages to the modern period, as well as to the history of scholarship more generally. The biannual volumes contain a mix of learned articles, unpublished documents, book reviews, research notes, and bibliographical information ranging widely geographically, chronically, and in subject matter while its contributors are drawn from all parts of the world, giving the volumes a decidedly international flavour.

Robin has been Univ’s archivist since 1993 and is also the archivist of Jesus College, Oxford. He has written three books about Univ including A History of University College, Oxford and Early Records of University College. He has also been Archivist of Magdalen College. He read Classics as an undergraduate and postgraduate at Oxford before training as an archivist at Liverpool. Robin has published extensively on many aspects of the history of Oxford. Most recently, he has co-edited The Unloved Century: Georgian Oxford Reassessed, a volume of essays published this year. His next book, Music in Twentieth-Century Oxford: New Directions, another volume of essays, this time co-edited with Professor Susan Wollenberg, is due for publication in 2023.

You can read an interview with Robin here.

Archives of the Future

We are delighted to announce that…