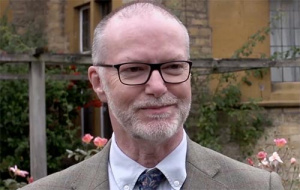 Peter Norreys, Univ Supernumerary Fellow in Physics, is Professor of Inertial Fusion Science in Oxford University’s Department of Physics. Last April, he chaired the International Conference on High Energy Density Science in Univ on behalf of the Institute of Physics attended by over 120 scientists. In March 2020, he chaired a Hooke discussion meeting in the Royal Society that brought together leading fusion scientists to discuss the future of inertial fusion energy in Europe, preparing a roadmap for a European demonstration reactor and accelerating the development of this potentially “transformative” technology.

In January 2019, Professor Norreys was awarded an Enabling Research grant from EUROFusion, part of EURATOM. The consortium comprises fifteen laboratories in nine nations, including the United Kingdom. Overall, the project has enabled increased co-operation and co-ordination of Inertial Fusion Energy activities using high power laser facilities across the European Union. The specific aim – to prepare for experiments on the PETAL/ LMJ facility in Bordeaux, France – has provided a focus for this concerted effort.

In this article, Professor Norreys explains how inertial fusion energy is moving closer to realisation as a source of nuclear power and why it has the potential to make a big impact in efforts to combat climate change. 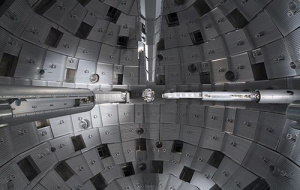 How does inertial fusion energy work?

Inertial fusion energy involves the compression of matter to ultra-high densities (300–1,000 gcm3) and temperatures (greater than 50,000,000 °C) over a very short period of time. This is done by irradiating and imploding a small spherical shell containing isotopes of hydrogen (deuterium and tritium), either directly using intense laser beams or by first converting the laser energy to soft X-rays. Once these density and temperature conditions are met, then the hydrogen-like ions have sufficient kinetic energy to overcome the repulsive barrier associated with their positive electric charges and for strong nuclear force to fuse these isotopes into helium ions.

As the rest mass of the fusion products (a helium nucleus and a neutron) is less than the combined masses of the deuterium and tritium ions (remember that energy equals mass multiplied by the square of the speed of light, i.e. E = mc2), this results in a massive release of energy for each fusion event. If a sufficient number of these fusion reactions occur, then more energy can be generated than was used to drive the compression in the first place. It should be possible to capture that energy so that it can be turned into heat in order to drive a steam turbine for electricity generation.

The scientific and technological progress in inertial confinement fusion research has been immense over the past two decades, especially in areas related to the assembly and understanding of the high-energy density conditions in the compressed fuel, as well as the critical technologies required for inertial fusion energy applications. These include high-repetition rate lasers, heavy ion beam drivers, pulsed power system and cryogenic target assembly and qualification.

How does inertial fusion tie in with the broader area of nuclear fusion?

All approaches to nuclear fusion must satisfy the Lawson criteria, which states that the product of the density, temperature and confinement time of the fusion fuel must exceed a set parameter for there to be net energy gain. Consequently, all fusion devices must prevent the fusion fuel from coming into contact with the surrounding reactor vessel in order to maintain the required ultra-high temperature.

One way to isolate the fusion fuel is to confine it at low densities over relatively long time-scales using strong magnetic fields. This research is now underway at the Culham Centre for Fusion Energy with experiments at the Joint European Torus (JET), the spherical tokamak MAST at Culham and the International Thermonuclear Experimental Reactor (ITER) in France.

The inertial confinement fusion approach is to assemble the fusion fuel at ultra-high densities and to generate a spark that generates a fusion burn-wave that propagates through the fuel. This is done by converting the kinetic energy of the implosion to thermal energy at the stagnation time. Devices that have studied this approach include the National Ignition Facility at the Lawrence Livermore National Laboratory in the USA, and the Laser Megajoule facility in France. Inertial fusion energy (the energy application of inertial confinement fusion research) requires repeated injection of fusion pellets and the deployment of high repetition rate drivers, at the 5–10 Hz rate.

What impact could this technology have?

The impact of realising inertial fusion energy will be transformative for humankind. There are no long-lived radioactive by-products, provided that careful selection of the reactor chamber materials is made. An inertial fusion energy reactor is compatible with the existing electricity infrastructure distribution and generation grid. The process is inherently safe, each nation can have security of supply, and the fusion fuels are abundant and will satisfy humankind’s needs for millennia to come.

Investment in the photonics industry will also generate many new spin-offs and highly skilled jobs. It promises substantial improvements to thermal neutron source brightness, thereby revolutionising neutron scattering for applications across the natural sciences, from biochemistry to life sciences. Most importantly, it promises no greenhouse gas emissions and allows us to envisage strategies for minimising the worst effects of climate change, while still bringing the remainder of the world’s population out of absolute poverty. 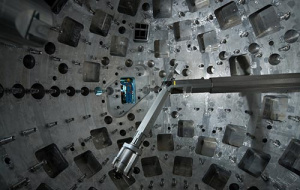 How close are we to achieving this?

Inertial confinement fusion arose out of the nuclear stockpile stewardship programmes in the US and UK. The concept rests upon the results of classified experiments performed under the limited UK test programme and the US Halite- Centurion programme, as well as the data that has been obtained from the National Ignition Facility. So while it is true that ignition has not been achieved so far, it is now arguable that sufficient progress has been made in understanding laser-driven burning plasmas to begin to contemplate what the next facilities might look like.

Given the urgency of the threats facing humankind from climate change, as highlighted by Sir David Attenborough in his December 2018 speech to the UN Conference on Climate Change in Poland, such a facility should aim for net energy out or even move towards high gain. The advantages of a funded inertial fusion energy research programme are that the technologies in laser and ion beam drivers, target manufacture and reactor chamber lifetimes can all be decoupled. So while it is difficult to predict the future and state how close we are to realising inertial fusion energy, I am confident that present and next-generation scientists in our universities, national laboratories and industry are up to the challenge and are capable of real delivery. Given the significant challenges in developing fusion reactors and associated technologies, it is likely that these may replace fission reactors from the middle of the century onwards.

If the UK government were to embark on a concerted bilateral effort with the EU, Asia and the US, then we could realise this dream relatively quickly. We in Univ are taking the lead in co-ordinating the European effort and in doing so are doing our duty to secure the future of humankind.

This article was prepared with the help of Stuart Gillespie, Head of Research, Impact & Innovation Communications in Oxford’s Public Affairs Directory was  first published in Issue 12 of The Martlet; read the full magazine here or explore our full back catalogue of Martlets below:

Our extended Univ family have…