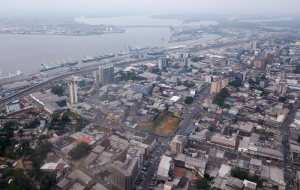 The Cameroon Conflict Research Group recently published a new working paper alongside articles on The Conversation and the Law Faculty website. Baroness Caroline Mbinkar, Visiting Fellow in Law at University College, began the group and it is now led by Dr Roxana Willis, Junior Research Fellow in Law and British Academy Postdoctoral Fellow, as well as featuring a number of Univ students.

Previously colonised by Germany, and then divided by the British and French colonial powers, Cameroon gained independence in 1960/1961. In 2016, violence broke out over the marginalisation of anglophones. The Norwegian Refugee Council named the conflict in Cameroon as the most neglected displacement crisis in the world.

The research group was established to investigate the conflict from a number of angles: the causes of the conflict (both historical and recent), the main parties involved, the role of the international community in the conflict, the perspectives of its stakeholders and the promising routes to resolution. The Group is funded from the UK Global Challenges Research Fund, the John Fell Fund, and the Economic and Social Research Council.

The Group’s first research report documented the human rights abuses taking place in Cameroon. The new working paper they have produced offers new insights into the Cameroon conflict and suggests a strategy for action. They interviewed 32 individuals in the anglophone regions of Cameroon, from a range of backgrounds, to learn more about the causes and experiences of the conflict. The report also examines the profound impact of the trans-Atlantic slave trade and colonialism in Cameroon, how this has fuelled inequality and exacerbated the conflict. Finally, the paper analyses the impact of international actors in financially supporting and training military forces.

The working paper produced by the Cameroon Conflict Research Group is available as a PDF. Dr Roxana Willis was also featured in a profile as part of the celebration of 40 years of women at Univ. You can read the articles in full on The Conversation and Law Faculty website.

Now in its fourth year…

Univ in the Master’s Garden

Held as a virtual event on…