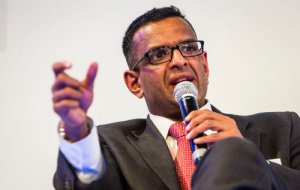 The podcast is produced by UK in a Changing Europe, funded by the Economic and Social Science Research Council, which is run by Professor Menon. The organisation aims to make the findings of social scientific research available and accessible to non-academic audiences interested in Brexit, the process and its implications. Recent guests on the podcast include Professor Margaret MacMillan, Professor Diane Coyle, CBE, former advisor to the Treasury, and Philip Rycroft, the former Permanent Secretary for the Department for Exiting the European Union (DExEU).

On 9 September, Anand will be on the panel for The Guardian Live’s “Are we heading towards a no-deal Brexit?” discussion. The event will be livestreamed globally from 7-8pm and tickets are £5 (plus booking fee).

You can find Anand on Twitter and get his most recent book, Brexit and British Politics, from Blackwell’s or Amazon.

Now in its fourth year…

A Table for Friends

Skye McAlpine, author of A Table in…

I am a consultant physician…