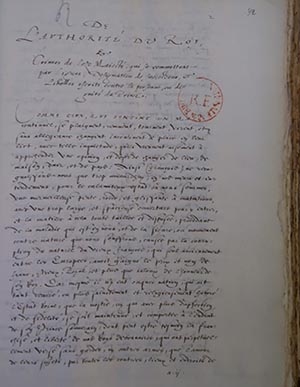 Thanks to the generosity of Univ’s Old Members, I was able to spend three days in the Bibliothèque Nationale de France in Paris. This has enabled me to follow up several loose ends left over from my previous time there in 2018, and has put me in a strong position for the final stretches of my DPhil.

I spent the majority of my time in the Manuscripts department at the grand Richelieu site of the BNF. Not all of the documents which I consulted were of great relevance to my DPhil, but that is to be expected; the purpose of the visit was, in part, to make sure that I had not missed anything important. I did, however, see two manuscripts of great significance to my project.

The first (BNF MS Dupuy 558 f. 81ff)) is a manuscript copy of Pierre de Belloy’s De l’Authorité du Roy, a 1587 political broadside against the rebellion (as Belloy saw it) of the Catholic League against the enfeebled King Henri III. This is one of Belloy’s better-known works (there even exists a modern Italian translation) but no scholar has, to my knowledge, been aware of this copy. Not even the BNF catalogue acknowledges Belloy’s authorship. What is particularly interesting about it is that it might represent an early draft of the printed edition. I found a number of additions in the margins, all of which made it into the printed version, and some of which refer to events which happened after the date give at the end of this manuscript (late 1586). My working hypothesis is that Belloy updated the manuscript as he went along. This interests me because it suggests that Belloy was working on this manuscript earlier than I thought; I had previously imagined that most of it was written after his incarceration in the Conciergerie in June 1587.

The second key manuscript was not by Belloy but one of his readers, the royalist Jean Passerat. (BNF MS Fr 5797). It shows Passerat, who would contribute to the famous Satire Ménippée of 1594, as a keen reader of one of Belloy’s other works, his Moyens d’Abus of 1586. It provides an interesting example of how early modern authors took notes from other books: Passerat noted down a great deal of relevant material, including the citations, then later marked with an asterisk those passages he wanted to use in his own treatise. I was able to show, by comparing Passerat’s notes with the draft treatise at the front of the manuscript (which he never printed), that a substantial numbers of his arguments and examples were cribbed directly from Belloy. This is an important finding because evidence of Belloy’s influence on his ideological allies has been quite rare. This manuscript provides valuable evidence for my thesis’s contention that Belloy was an important political writer in the 1580s.

In the remainder of my trip, I was able to spend some time in the pleasant surroundings of the BNF’s main site at Tolbiac, where I had the opportunity to check a few references for works not held in the UK. I should like to thank, once again, Univ’s Old Members for their generosity in funding these travel grants and, in so doing, making the final stages of my DPhil less onerous.