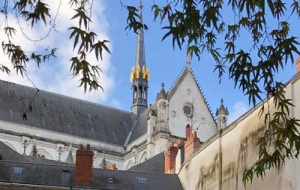 In December 2019, after the gruelling first few weeks beginning my doctorate, I felt my body and mind relax as I left Oxford at six in the morning to run away for a couple of weeks just before Christmas. Was I off to the Bahamas for some summer sun? Maybe skiing in Verbier? Far better… this historian was flying to Brittany to use her favourite archives!

My research focuses on the history of the French Empire in North Africa, particularly in Morocco and the history of gender and sexuality. Since Morocco was a protectorate and so not technically a formal part of France, most of my archival material is located in the Archives Diplomatiques in Nantes, in Western France, a small town that used to be at the heart of Brittany.

Nantes is undeniably steeped in history. The hugely imposing castle that used to be owned by the Dukes of Brittany, and whose moat and drawbridge make it look just like its been ripped out of fairytale despite the anachronistic tabac and kebab shop next to it. It was also the largest port in France at the height of the French Atlantic slave trade; the city’s winding streets, rain-splattered and twinkling iron streetlamps certainly seem charming but knowing that their history is so intricately entwined with institutionalised violence and exploitation in a way that has been conveniently forgotten for generations adds a certain gravity of responsibility to my research.

Staying in an Airbnb in an old maid’s room in the attic of a typical 18th century French house (5 floors of winding staircase, courtyard, balconies for the bourgeoisie), I spent 10 days steadily reading through thousands of pages of government memos, reports and letters. Although the archives are well-organised and well-catalogued, not to mention well-heated and the staff friendly, this is still a particularly difficult activity that often feels like you’re wading upstream. I was looking for information on prostitution, surprisingly easy since the French government regulated brothels and red-light districts in Morocco. The bigger challenge came when looking for fragments of queer history and any references to sexuality that deviated from an accepted norm.

Spending time in an archive often feels like looking for a needle in haystack, except that you’re under strictly timed conditions (you can only afford a certain number of days and you need to have something written in a few months), you feel you’re up against other people that you know have been looking through the same haystack and you know you’ll never be able to properly search through the entire haystack, so all you can do is pick the most likely corner and settle down there for a few hours. Everything you do is underpinned by burning anxiety that you’re not working hard enough or efficiently enough, and as your eyes wash over thousands of pages of neatly typed French carbon copies or the rapidly scratched scribbles of a colonial administrator, the fear of missing a crucial detail is palpable. It’s ironic that the fear of missing something is your biggest distraction and the most likely reason to overlook something.

People float to the surface of these documents. You start to recognise the same names, tracking colonial administrators as they rise through the ranks or the same women are repeatedly arrested for sexuality outside the state’s jurisdiction. Echoes of voices call to you from each page. A married, pregnant woman pleads with Moroccan lover to “feel the warmth of your body and listen to your voice”. Couples are found in compromising positions in the dark corners of cinemas and struggle to hurriedly dress themselves under the light of a policeman’s torch. Whispered phone calls are overhead in crowded hotel lobbies.

I spent two weeks in Nantes, looking for fragments of information and whispers of some of the most intimate parts of people’s lives. I trawled through thousands wafer-thin pages. I barely left the reading room but met hundreds of people. From cold and rainy Brittany, I witnessed their lives play out on the other side of the Mediterranean.