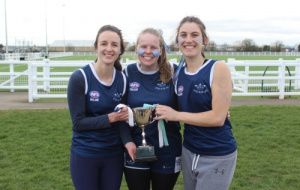 At Horspath Athletics Ground earlier this year, the Oxford Aussie Rules football club took on Cambridge in their annual Varsity match. It was a big day- the 100th consecutive Varsity Match for the Men’s side (the longest running league outside of Australia!) and the 3rd Women’s Varsity match.

The Oxford women’s team were the clear underdogs going into the match- we hadn’t won a game against Cambridge this season, and Cambridge were the champion of the multination Fitzpatrick Cup held earlier in the season. However, we had a solid few weeks of training consolidating some key skills, and with the help of our coach Ben, we were feeling strong and ready to give them a run for their money! We managed to maintain a lead throughout the entire game, and come away with a convincing win: 51 to 20. This was the first time the Oxford Women’s side had won a Varsity match, and it was great to do so in front of our male and female supporters. 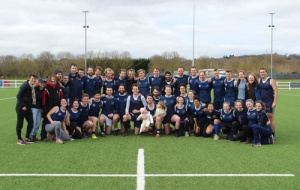 The men played their match following ours, including Univite Mitch Robertson. Unfortunately the game had to go ahead on a smaller size field than is standard for Varsity due to wet grounds, however they made the most of this situation. Cambridge ran away with the game in the first quarter, and although Oxford did a great job narrowing the lead within 3 goals, they were unable to get back in front, with a final score of 57-85.

Aussie rules welcomes people with no experience, being Australian is certainly not a pre-requisite and we have a lovely welcoming community, with a relaxed training and game schedule. If you are interested in playing next season (whatever that may look like) or want some more information, email me Elizabeth.Hamilton@univ.ox.ac.uk.

Closing the Libraries at the end…

It is well-known that…

Some very exciting things have been…

We’re looking for ideas from our…