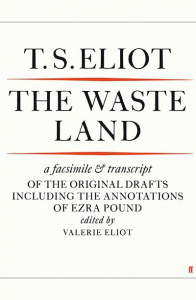 Everyone thinks they know how The Waste Land starts, “April is the cruelest month”, and so it goes. However, the Facsimile is a collection of original manuscript documents from the drafting and editing of the poem by Ezra Pound, and shows the various stages of the poem from its conception to its actualisation. Who knew the poem, originally called “He Do the Police in Different Voices”, started “first we had a couple of feelers down at Tom’s place,/ There was old Tom, boiled to the eyes, blind”. I first looked at the Facsimile when I was studying The Waste Land at A Level, and was fascinated by the concept of an editorial process. I hadn’t really thought about how a piece of Literature comes into being, but the Facsimile is interesting because it shows how much a document can change before it is published.

Sometimes looking at the things that were left out is just as interesting as what’s included. There’s something very personal about the Facsimile: looking at Eliot and Pound’s handwriting reminds us that these men were real people, and not just famous names with poems attached to them. It’s also quite funny at times, Pound’s comments and changes were somewhat brutal! I haven’t looked at The Waste Land in the same way since, and it inspired a real interest in manuscript culture in me. I’d thoroughly recommend it to anyone with an interest in Literature, even if it’s to see what T.S Eliot’s handwriting looked like!