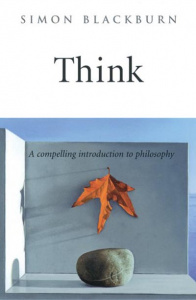 When I was given a book called Think just before I came to Oxford, I was a little offended. Philosophy, I had figured, was one area where I could confidently claim to know the basics, and I felt that an introductory book would have been too simple and not interesting enough for me. But since Think had the advantage of being a small book with large words, I gave it a shot.

The reason why I would now recommend it so much is, ironically, because it is an introduction to some of the most interesting areas of philosophy. Some areas in the book I had studied previously, and enjoyed hearing about again, and some of them I hadn’t even considered.

I didn’t, and embarrassingly, still haven’t, read the whole book cover to cover, and unless you have a burning desire to read every chapter in order, I would recommend the method I took. The introduction was particularly good. In it, Blackburn talks about some different ways to think about philosophy, and in particular, some of the reasons why it’s so crucial to do so. It made me realise that philosophy wasn’t just a subject at school that I’d enjoyed, but also that it was a mental activity that each one of us engages in when we consider simple questions like “Why am I different from this person?” or “Why was I wrong when I was so convinced that I had been right?” The answers to questions like these cannot be considered without philosophising.

Having read the introduction, I skipped straight to a chapter I was interested in, and I advise any other reader to do the same. For me, this was chapter 5 on God, since the existence or non-existence of a deity had always been my favourite area of philosophy. Blackburn talks about St. Anselm’s ontological argument (which I had heard of), Thomas Aquinas’s cosmological argument (which I thought I knew well), and Hume’s discussion of the argument from design (which was a take I didn’t know, on an idea I did know). Blackburn also discusses the problem of evil, and some arguments against the objective existence of God, entirely intelligibly and interestingly.

To tie this into the other half of my degree, the chapter on free will was a really interesting way for me to start thinking philosophically about psychology, and to start to blur the boundaries between what I thought were two different areas of knowledge. Having never studied it before, a quick look at determinism and the arguments against was useful when I came to study the topic later on in the year.

Finally, the chapter on reasoning will help with Logic, which all philosophers at Oxford study in their first year, and the chapter for knowledge is some fundamental stuff that will be interesting for anyone philosophically inclined.

I believe any PPE-ists, theologians, classicists or other psychologists will find this book equally as enjoyable as I did.