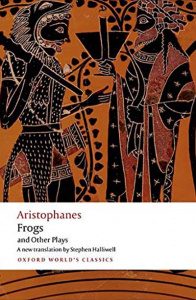 By Aristophanes
Review by Raoul (Classics)

Thesmophoriazusae (Women at the Thesmophoria) is an outrageously vulgar comedy filled with shocking jokes. Written by Aristophanes, one of the forefathers of toilet humour, the scatological and sexual jokes made in this 2400-year-old play are still incredibly similar to the ones being made today. The sheer number of innuendos definitely surprised me when I first read this text and I was struck by how rude some of the jokes were. This was especially true because at the time, I was under the impression that all Classical texts were intimidatingly grand and serious. But the cheekiness of this play meant it was a much more accessible and appealing read, exposing you to a genre of Classics that you are unlikely to encounter normally.

The plot focuses on the infiltration of a women’s festival (the Thesmophoria) by an old man called Mnesilochus, sent there by the tragedian Euripides who has been slandering women in his plays and now fears they are plotting revenge. Much physical comedy ensues from the cross-dressing Mnesilochus who later gets found out and apprehended, but Euripides comes to his rescue dressed in several farcical disguises.

Amidst the absurd comedy, such as the women thinking a wine-skin is a baby and Mnesilochus threatening to sacrifice it, Aristophanes is making social commentary through his parody of Athenian society allowing him to create humorous caricatures of different groups of people such as playwrights and women. He parodies the tragic style of writing in order to mock it by the exaggeration in his characters’ speech, either in style or by direct imitation.  The tragic tone is often undermined by the parodied caricature of Mnesilochus with his characteristically vulgar humour, or by the completely absurd situation tragic and dramatic language is being associated with. The absurdity of the sexual role reversal between women and men is notable due to their non-speaking role in Athenian society, primarily attacking the effeteness of this generation of men in contrast to the warrior mentality of their predecessors.