The Whig Interpretation of History 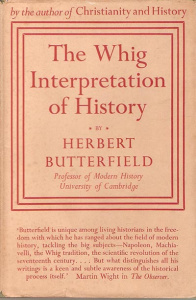 By Herbert Butterfield
Review by Guy (History and Politics)

Don’t let the boring title throw you off – I’ve chosen this book because it genuinely changed the way that I read history.  Butterfield doesn’t deal with a particular era or a particular location, he instead attempts to examine how history is written in a much wider sense.  He puts forward the view that “Whig Historians,” are guilty of writing histories that lean in favour of progress and revolutions. Whilst this is not specific to Whigs, the former British political party, this was one of the ways in which this principle was applied.  Whigs were seen as the more progressive party in Britain at the time (as opposed to the Tories) and therefore historians wrote about Whig reforms in a favourable manner.  The same, Butterfield argues, can be said for how histories of religious conflicts have been favourable towards Protestants, who have been presented as the more progressive side of the Christian debate (as opposed to Catholics).

These specific examples allow Butterfield to argue that progress and revolutions (at least successful ones) have been written about in an almost moral sense.  Historians have passed their own judgements on issues from a different period.  Butterfield shows this and proposes that it is actually the role of the historian to analyse events on their own terms, meaning not to make judgements based upon today’s standards.  This is an important book to read for anyone interested in history as a subject, even just as a hobby.  Butterfield allows the reader to apply his observations and suggestions to almost any historical situation, and therefore this book can be seen not only as an interesting read but also as an important tool for a historian.  Writing in 1931, his ideas went on to become a very important concept within historiography (the study of how history has been written). Once the reader understands Butterfield’s argument, they might start to see “Whiggish” history in other things they read. The Whig Interpretation of History certainly helped me with reading things critically and questioning the motivations (conscious or unconscious) of a historian.