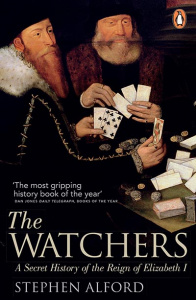 The glorification of the reign of Queen Elizabeth I often produces an image of a peaceful, serene “golden age”, free from conflict or disturbance. It is this image Stephen Alford, in his book The Watchers, endeavours to unseat. The book centres on the various espionage plots that threatened Elizabeth during her reign. The Babington Plot of 1585-6, the Ridolfi Plot of 1569-71 and the conspiracies of her own half-sister, Mary Queen of Scots, are all rigorously researched and incredibly detailed. They present the controversial idea that Elizabeth faced revolt, assassination and deposition at every turn. Moreover, the book widens the context and geography of its focus to understand the European challenges Elizabeth faced. England was, after all, a Protestant country in a Catholic Europe. Pope Pius V tried to depose her and Philip II of Spain attempted armed invasion. Thus, the book illuminates the complex espionage network that spanned across Europe and the activities of various spies such as William Allen and Anthony Babington. Readers will be reminded of current terrorist cells in the Middle East when learning of the training such spies received in Rome, as the book brings to life the experiences of the spies and of Elizabeth herself.

Meanwhile the book focuses on the concerted and successful operations of Elizabeth’s defence network in England, headed by Sir Francis Walsingham. It centres on the counter-spy tactics employed in plots such as that of the Babington plot, where Walsingham caught and converted a Catholic spy into a double-agent and struck up a correspondence with Mary Queen of Scots in order to implicate her in a treasonous attempt on the Queen’s life. Alford’s narrative is thrilling, gripping and easy to read, packed with interesting case studies that dispel the idea that political history is boring. Whilst Alford’s research is by no means comprehensive, indeed vast amounts of episodes are left unmentioned such as wider impacts of the plots themselves, the book is a definite must-read. Picking up the book on the recommendation of a teacher in Year 11 made me understand the mystery of History and sparked my interest to pursue it in the future.