The Rise and Fall of the Great Powers 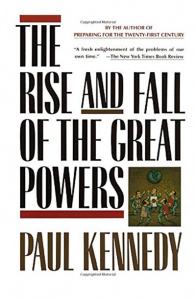 By Paul Kennedy
Review by Matthew (Ancient and Modern History)

Superpowers come, superpowers go. But ever wondered why? History abounds with stories of great empires whose economic and military might powered them to a position of dominance.  Yet each, at some point, after burning like a bright firework, loses energy, tumbles from their peak, their glorious achievements to become, well… history. Think of Ancient Greece, the Roman Empire, the Spanish conquistadors, and the other European powers of France, Germany and Great Britain, each taking their turn at the top table. What does this revolving door mean for the current set of global “galacticos” ­– the USA, China and Russia? After all, this is important to know as a changing of the superpower guard is often accompanied by conflict – no superpower willingly gives up their pre-eminence.

The author covers a lot of ground but broadly splits his work into two areas of focus  Firstly, a look backwards at 500 years of history tracking the rise and subsequent fall of dominant empires. Secondly, application of this knowledge to predict what could happen if current superpowers, in particular the USA, do not manage the risks identified. While long, the book can be accessed in piecemeal fashion to understand more about your superpower of choice.  This is one of the books great achievements – the breadth is impressive, yet Kennedy is skilled in extracting key themes.

Kennedy argues that superpowers, in order to remain “super”, must constantly manage the tension between economic investment (creating resources), economic consumption (consuming resources) and military spending.  Getting the balance wrong can be terminal.  Too little military spending leaves your economy vulnerable to predators, as seen in the inward looking 18th century China.  Too much military spending leaves no economic fuel left to grow your economy, as witnessed in the 20th century Soviet Union.  For superpowers to sustain themselves, they must avoid what Kennedy calls “imperialist overreach”, an obsession with global influence which diverts vital resources away from economic development towards ever increasing military spend.

This book, written in 1987, is best remembered for an additional chapter added at the last minute.  This chapter foresaw the potential decline of the USA unless they managed the tension between economic investment and defence spending effectively.  What the author was unaware of at the time was the impending demise of the Soviet Union and the end of a Cold War rivalry that had driven mammoth USA military spend.  Yet, as Russia regains confidence and influence in the modern world, and the Chinese economic tiger tests the pre-eminence of the American economy, the dangers that Kennedy identifies seem as relevant as ever.  A thought-provoking read that brilliantly shows the relevance of history to our modern day decision makers.