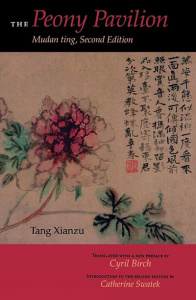 The Peony Pavilion, known in Chinese as “Mudan ting”, is Ming playwright Tang Xianzu’s greatest work. Put simply, it is the love story of Du Liniang (Bridal Du) and Liu Mengmei. Bridal is the daughter of an important official and, as she walks through a garden on her father’s grounds one day, she falls asleep and encounters in her dream a young scholar, Liu Mengmei, whom she has never met before in real life. A passionate romance begins between the two in this dream realm but Bridal is rudely awakened by a flower petal falling on her. In the subsequent days, Bridal obsesses over what happened to her but cannot find Mengmei in her dreams. She eventually dies of lovesickness. However, it does not end there because Mengmei somehow finds himself at Bridal’s father’s house and Bridal is able to return to the human realm, and to Mengmei, as a ghost.

This may sound like an overwrought melodrama, but it is far from being so, The Peony Pavilion is in fact a remarkably sensitive and subversive play even by modern standards, featuring, for example, an intersex Daoist priest, endless innuendo and attacks on the repressive style of neo-Confucianism known as “Daoxue” which was widespread at the time Tang was writing. The book is a great introduction to the three teachings or “san jiao” of China – Buddhism, Confucianism and Daoism – as the play features characters emblematic of each school. The play also explores Tang’s search to reconcile his fascination and belief in the regenerative power of authentic, true emotions and the transcendental values of Daosim and Buddhism with the claims of Confucian ideas.

This play proves that pre-1900 Chinese texts are not inaccessible, unrelateable or worse irrelevant to modern audiences, dealing as it does with the age-old conflict between the individual and the community. However, it is still very distinctively steeped in Ming imperial and classical Chinese culture, albeit sometimes with an irreverent twist.