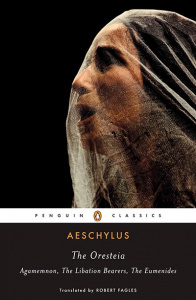 By Aeschylus
Review by Lucinda (Classics)

During my application process, I’d read a lot of literature which was based around history or epic poetry. I really wanted to read some drama, but I was a little daunted by the prospect.

I was recommended The Oresteia by Aeschylus by a friend and decided to pick it up from the library. It was exactly what I needed. You may think that reading drama sounds odd – but it really gives you an insight into the technical aspects of performance as well as giving you a feel of the power that some speeches hold.

The Oresteia is actually three plays, which all link together. The first Agamemnon, based on a character that anyone who has also read the Iliad will recognise, follows his journey home from Troy and the events that unfold when he finally arrives home to Argos and his wife Clytemnestra. The second The Libation Bearers contains the reunion of Orestes and Electra, Agamemnon’s children, and their decision to take revenge for the events that occurred in “Agamemnon”. Finally, The Eumenides deals with the Furies’ pursuit of Orestes to exact justice on him and the court case that ensues, which brings various moral debates into question.

Without giving away any spoilers, it is definitely worth a read if you’re interested in Greek literature, politics, family life and morality. People don’t often think of reading drama at first, but it can be incredibly helpful in finding out more about the lives of the Greeks as it is a relatively short read that gives you an indispensable insight.

When I was applying to Oxford, I was particularly drawn to fifth-century Athens and the birth of democracy, which was of particular interest to me considering the current state of politics. My teacher recommended that I read something from that time, and picked out Aeschylus’ Oresteia (in translation, don’t worry!). His reasoning was that not only does it bring up many of the thoughts and debates that Athenians had themselves about their democracy, nor does it just act as an exemplar of Athenian drama that was so integral to the running of their society, but it is one of the most powerful, thought provoking pieces of literature he had ever read.

It is the only extant drama trilogy from this period that we have. In Athenian drama festivals, three playwrights would be in competition; they would all write three tragedies (some linked more than others – the three plays of the Oresteia are linked) and a satyr, comic play. Therefore, the Oresteia is an important historical artefact; and the topics that it brings up are ones that you will consider in your time at university.

I found it quite tricky at first to get myself into these plays, especially because this was the first Athenian play I had read in full – that meant that the style of English is quite old, and there are also many mythological references that made no sense to me at all! I would recommend reading a summary of the play beforehand and maybe the background myths too to give yourself a helping hand – it doesn’t take too long and it really allowed me to enjoy the play a lot more and consider the topics it brought up without looking up what everything meant.

Also, keep an eye for any drama productions of this play (or other Greek tragedies) – I saw an amazing production of the Oresteia at the Almeida Theatre a couple of years ago, and it brought this play to life for me, as it would have been to Athenians.

The play is about Clytemnestra’s murder of her husband Agamemnon when he returns from Troy since he had killed their daughter to set sail for Troy, at the bequest of the gods. Orestes, the son of Clytemnestra and Agamemnon, then kills his mother in revenge, as Apollo demanded. Then a divine court is held to decide whether Orestes should be punished or not.

The range of topics that Aeschylus addresses is huge: how successful were law courts in democracy, what is the relationship between revenge and justice, what was the position of women in fifth century Athens? Such a thought-provoking piece wrapped in an enthralling, mythological narrative is more than worth the initial difficulties of reading it, and it prepares you for what kind of texts you will be reading if you decide to apply to Oxford.