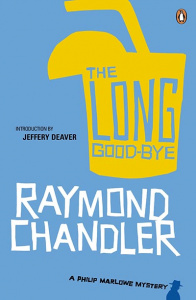 By Raymond Chandler
Review by Alex B (English)

I first read The Long Goodbye when I was 16, and when I did I was introduced to the seedy world of Phillip Marlowe, the character who for me will always embody the classic hard-boiled detective. Marlowe moves around in post-World War II Los Angeles investigating for anyone from rich heiresses who need stolen jewellery recovered to worried publishers who need their star writer found, whilst meeting all kinds of characters along the way. He doesn’t take divorce cases though.

The novel opens with Marlowe meeting the enigmatic Terry Lennox drunk on the street, having been kicked out of a taxi. The two become friends and regularly meet for a drink in the bar, until one day Lennox needs Marlowe’s help to leave the country undetected under suspicious circumstances, leaving a dead body behind. The story is masterfully told, as Chandler creates a living, breathing world that sucks the reader in, with a cast of intriguing characters whose motivations are always uncertain. The plot, whilst complicated, is engaging and fast-paced and always has the reader guessing what will happen in the next chapter, and how Marlowe will reconcile the situation.

The book’s atmosphere is melancholic and full of nostalgia and regret as an ageing Marlowe has to make his way through a world full of devious housewives, alcoholic writers and bloodied corpses, all the while trying to keep to his own set of morals and make sense of it all, whilst reflecting on his own loneliness. It is an atmosphere reflective of Chandler’s own mental state during the novel’s completion, as his wife was very ill and dying, and his own insecurities as a writer surface in the character of Roger Wade, an alcoholic author that Marlowe must find at one point.

This was one of the books that really inspired me to think about language and its ability to evoke such fantastic images, emotions and scenes. I would recommend the book to anyone, and especially to anyone interested in thrillers or mystery. Meeting Phillip Marlowe for the first time is an unforgettable experience, and in the 70 years since his creation, he has proved to be Chandler’s most enduring and loved character.