The Inheritance of Rome 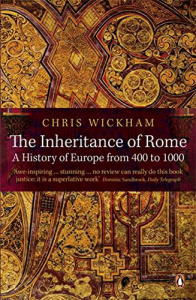 By Chris Wickham
Review by Conrad (History and Politics)

If there is one thing that puts people off studying history, whether that be at GCSE, A Level, or at university, it’s that it is often perceived as boring, irrelevant, and leaving its students with no particularly noteworthy “transferable skills”. As a History and Politics student, I naturally disagree with this, but I hope that by introducing you to a typical first year textbook at Oxford, I can debunk some of the myths surrounding History at undergraduate level and convince you to consider applying to study it.

The Inheritance of Rome by Chris Wickham, who is a professor at Oxford, is an excellent example of how all history, whether it be 2000 years in the past, or just a few decades ago within our own lifetimes, is not only relevant and important, but still discussion-provoking and extremely engaging as an academic discipline. Wickham’s analysis of the period immediately following the fall of the Roman Empire in western Europe is particularly potent in this respect, as it challenges two of the predominant misconceptions held about the Middle Ages; firstly, that the 10 centuries or so that spanned between the fall of Rome and Renaissance were wholly unsophisticated and brutal (hence the term “dark ages” that is often afforded them), and secondly that this period acted as the birthing of what we may call a “modern nation” – Wickham draws attention to the fact that most of us see history (professional historians included) in a teleological manner, essentially meaning that we happily disregard detail and basic fact in order for certain periods in history to be shoehorned into our overall understanding of how we came to be in the present day.

Wickham’s study of this hugely intriguing period encourages the reader to view the Middle Ages as a period of history worthy of study in its own right – not as an intermediary between the great Classical civilisations and the rebirth and revolution of the Renaissance. Indeed, there are so many themes to explore: mass-migration, the development of cultures, the beginnings of nationhood are just surface examples. You might notice, in fact, that in reading Wickham’s analysis of the period, that some of the themes engulfing Europe at the time bare some similarity with those today. The breakdown of established order and the regeneration of ideas and systems are inherent features of the Middle Ages, just as they are in the 21st century, amongst a social and political landscape that is undergoing a similar degree of drastic change and upheaval. For anyone curious about society and politics, medieval history is a gold mine of perspectives that will enrich your understanding of the modern world.

On top of this, Wickham’s book is remarkably easy to pick up and read – I actually read it on holiday one summer and it hardly required much dedication at all. If you are looking for a gentle but engaging introduction into a period of history that you likely haven’t studied at school, then this is a perfect place to start.