The Fall of the House of Usher & Other Writings 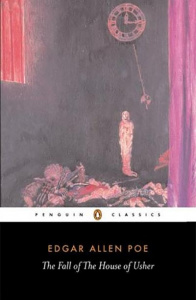 I first read Edgar Allan Poe’s poem “The Raven” when I was around 11 and liked it for its rhyme scheme and rhythm. It’s a poem that is made to be read aloud and I connected with it in a way I never had with what I considered to be “old classic books”. “The Raven” is not too long and is very famous – you’ve probably heard it before, perhaps on The Simpsons. The poem is about a man who is visited one night by a raven. He reflects on his lost love, Lenore, and is driven to the point of madness by the raven’s repetitive response to his questions with “nevermore”.

It was my introduction to Gothic literature – a genre of all things vaguely disturbing and eloquently dramatic. Edgar Allan Poe’s works were not on my syllabus, but I found reading them incredibly helpful in understanding both the Gothic genre in the 19th century and my own passion for English. The Gothic is not for everyone – and critics remain divided on “The Raven” ­– but the genre existed mainly as a form of escapism for readers, so is designed to be frightening and sensationalist. Motifs such as old castles, secret passageways, graveyards, ghosts, vampires and demons frequently appear in Gothic literature and Poe’s Gothic works are no exception.

“The Fall of the House of Usher” is a story about an unnamed narrator who is going to visit his ill friend, Roderick Usher. Roderick’s twin sister Madeline is also ill with this unknown disease and Roderick believes that his house is sentient. The death and burial of Madeline is the catalyst for a series of supernatural and disturbing events, culminating in a grand finale which leaves the narrator fleeing from the house as it comes crumbling down. It is a cautionary tale of sorts, and full of metaphor and ambiguity. There are no “correct” interpretations but the themes of ancestry, inheritance and the self-fulfilling prophecy are particularly interesting.

“The Tell-Tale Heart” has some similarity to Roald Dahl’s short story “Lamb to the Slaughter” (though the outcomes of the main characters are decidedly different). It is about a narrator who, in their paranoia, murders an old man. The narrator hides the dismembered body under the floorboards and the climax of the story comes when the police arrive and are sat on top of the floorboards under which the dead victim is buried. It does sound grim, but it’s surprising how much you sympathise with the narrator, even though his actions are reprehensible. Once again, there is plenty of metaphor and ambiguity and it leaves you with a lot to think about.