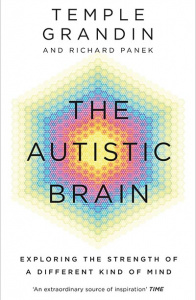 The Autistic Brain is a popular science book written by Temple Grandin and I assure you – it’s groovy! Temple Grandin is one of the most inspiring women alive. In 2010, TIME listed her one of the world’s 100 most influential people. She won numerous awards for her public outreach and her life has been the subject of several documentaries. Temple Grandin is one of the most acclaimed experts on animal behaviour and autism. In addition to her academic view of the field, being autistic herself gives her invaluable insight into the minds of “neuroatypical” people as she calls them.

In The Autistic Brain,together with journalist Richard Panek, Dr Grandin takes you on a journey through another kind of perception, a different view of the world, of social interaction. She does so by alternately telling anecdotes from her own life as well as presenting some of the scientific research in the field. And that’s what really makes The Autistic Brainso enjoyable and such an addictive read: You can find factual information on autism everywhere online and offline but never does it sink in quite so well than when pitched to you by Grandin’s ingenious metaphors of how it is like to be autistic.

She is gifted with a very down-to-Earth style of telling her stories and a talent for putting into words what “boring” neurotypical people could otherwise merely guess by observing the behaviour of autistic people. In the book she explains everything from why autistic children are fascinated by details or sometimes spin in circles holding their ears, to how it can be that a hug often feels terribly constraining to an individual with Autistic Spectrum Disorder although physical pressure on the body can be such a release. Throughout the book the threads are being spun into a coherent picture, into Grandin’s own account of how the autistic brain works differently from the neurotypical brain. Also, Temple Grandin explores the disadvantages and – what’s more – the advantages to having an autistic brain.

I came across this book purely by chance. On my homeward flight from a long stay abroad – I was about to start my degree at uni – I wanted to read something new and exciting and spotted its title on the shelves. It was relevant to my course and I knew Temple Grandin from the autobiographical film about her named, unsurprisingly, “Temple Grandin” (make sure you check it out, it’s fascinating!). I bought the book and could not put it down until I reached its back cover. Temple Grandin has featured in the public a lot and if it is not this book but another one of hers that you plan to read, I am sure it will be equally worthwhile. Also, there is lots of information about her online including a TED talk video. All that success in her academic and public career despite the fact that autism has been considered a considerable impairment to intellectual prowess – remarkable!