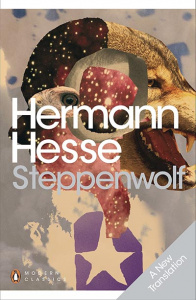 One of the joys of exploring literature is rebellion, and for me that was a rebellion from a notion of an exclusively English canon of “classical” texts. Hermann Hesse’s Steppenwolf is a German novel published in 1927, a novel whose title has seemingly been overtaken in the popular consciousness by the rock band and DC Comics character of the same name.

In summary, Steppenwolf takes the form of a book-within-a-book by Harry Haller (whose initials H.H. mirror that of its author – coincidence?) entitled Harry Haller’s Records (For Madmen Only). Previously an academic, Haller has turned his back on a 1920s Germany that he sees as morally depraved and increasingly tending towards insular nationalism, as his mental health spirals in a ceaseless cycle of depression, self-loathing, and suicide attempts (cheery). Railing against the unending mundanity of bourgeois existence, Haller splits his soul in two, designating all of his primal and carnal urges as part of an alternate personality, Steppenwolf (literally “wolf of the mountain”), which his intellectual side cowers in fear of.

The novel eventually descends into surreal existentialism, as Haller scrambles to find reasons to carry on living, somehow ending in his attendance of The Magic Theatre, a psychedelic space in which Haller fights a war against cars, murders his lover and plays chess, using the infinite subdivisions of his soul as pieces. Haller eventually realises the fallacy of Faustian duality, instead concluding that all human beings are born with an absolutely compulsive need to imagine themselves as unified wholes. No matter how often and how drastically this illusion is shattered, they always manage to patch it up again, accepting that he contains multitudes.

If you’re interested in reading more foreign literature, I’d also recommend Anne F. Garréta’s Sphinx (a novel in which both the narrator and love interest remain genderless for its entirety), Yukio Mishima’s Confessions of a Mask (a harrowing but beautiful account of homosexuality in wartime Japan) and Mikhail Bulgakov’s The Master and Margarita (in which the devil wreaks havoc in Moscow, accompanied by an enormous cat).