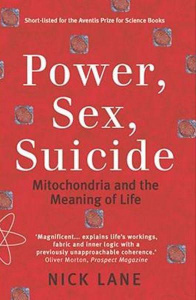 Biochemistry is an eclectic subject, and especially when you’re discovering your interest for the first time, it can seem daunting to read an entire book that focuses on one area, or in this case, on just a single organelle. In my case, this sort of aversion to commitment led me to dilly-dally, and put off extra-curricular reading, but I’m very glad that I finally found time to read this book by Nick Lane. I enjoyed it a lot and in fact, it inspired me to write an extended essay during my A Levels on how mitochondrial respiration might be the root cause of ageing.

Straightaway, it’s obvious that this is a book about mitochondria, but what isn’t apparent from first glance, is the winding tale it tells, through historical breakthroughs, across disparate topics, and up to the very forefront of research. Lane’s tone is quite informal and light-hearted, but he manages to present complex topics that really get you thinking. In fact, one of my favourite things about this book is how it presents opposing ideas, with the evidence that supports and contradicts them, often leaving it up to the reader to decide which they find most convincing. This way of presenting information is akin to the way you learn at university, and represents a shift in mind-set from fact-learning that can give you a head start on higher level study.

The subject matter is really engaging stuff: there’s quite some weight to put behind the phrase “meaning of life” in the title. From the first chapter, Nick Lane puts mitochondria right at the centre of evolution, arguing that by a fluke of history, a once in 4-billion-year chance, these organelles, previously free organisms in their own right, gave rise to all eukaryotes that have ever lived; every organism that we can see in our macroscopic world; and so much more. But it doesn’t stop there: he pursues the effect mitochondria had on the evolution of sexual reproduction, warm-bloodedness, sub-cellular membranes, and of course, ageing, amongst many other things. It really demonstrates the interconnectedness of biochemistry and living organisms in general.

It also doesn’t hurt that aerobic respiration, its mechanism, and surrounding metabolism is a relatively large topic in first year at Oxford. Mitochondria and the Meaning of Life by no means covers everything that you need for the course, but it provides a solid foundation and perhaps more importantly, a lot of context to the ideas discussed. I genuinely think this book is as close to a perfect bridge between A Level and university as could be hoped for, and that is why I wholeheartedly recommend it.

The idea of reading science beyond the syllabus can conjure up visions of trudging through a dusty old textbook that’s about as interesting as watching grass grow. So when I stumbled across this book I knew from the title alone it would be an interesting read, and I wasn’t wrong! This book is about how mitochondria are so much more than just “the powerhouse of the cell”. How they arose in the first place, the evolution of multicellularity, the evolution of sex as a means for reproduction, and the role of mitochondria in programmed cell suicide and ageing are included in the topics tackled.

I was particularly pleased I’d chosen to read this as some of the subjects it covers have popped up throughout my course, and I felt the knowledge this book provided me with helped form a foundation which I could build upon. Rather than just spit out facts, this book covers the journey scientists took to uncover the conclusions found and debates some of the popular theories. It’s useful in the transition between the science you study at school, where most of what you cover is concrete fact, to science at university, where it can become a lot more contentious, particularly in the medical sciences. I’m not alone in enjoying the read – the book was shortlisted for the Royal Society Science Book Prize in 2006 and was described by The Guardian was “one of the most interesting stories modern biology has to tell”.

This book tells a biological story of mitochondria, a crucial part of our cells, and explores aspects of human evolution. Despite the catchy title this read has a lot of detailed information which can form a foundation for students wanting to study biochemistry or related subjects.