People of the Book? 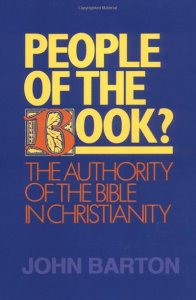 It is often too easy, and always over-simplistic, to think that Christians believe in the Bible, Muslims in the Qur’an, and Jews in the Torah. Although this is not necessarily false, the way that these texts function within these religious communities can be complex, and is observably not uniform even within one denomination. People with apparently similar religious conviction disagree heatedly about how to interpret particular texts, which texts to include in the canon, and about what it means to call scripture authoritative. John Barton enters the fray against one particular strand of Western Christian understanding of the Bible, and in doing so brings to the fore the fragility of ideas often assumed to be fixed.

Your reaction to this book is likely to vary greatly depending on your own preexisting view concerning religion in general and scripture in particular, but it will also, in believer and sceptic alike, include some further reflection on what it might mean to take the Bible seriously. If you begin to read thinking that you are a “bible-believing Christian”, Barton will take you at your word and allow you to be so, and will then ask, gently but persistently, if you are sure you’ve understood what that might mean? If, on the other hand, your starting point is that to “believe in the Bible” is to abdicate rationality and simply swallow whatever someone wrote two to three thousand years ago as the last word on any subject, you may be brought to understand that there is more nuance than you had imagined in the different ways believers can approach these texts.

The title of the book includes a deliberately provocative question mark: for many, believers must proudly wear this designation – no matter that it is an appellation given initially to Christians and Jews from a context-dominant “other”, and thus in a sense an assertion of power over them – and therefore the question mark is unnecessary: for other reviewers the invitation to give the negative response may suggest that in the argument of the book Barton falls short of the promise of the title, since he refuses simply (or simplistically) to remove the Bible from the central place that it holds in Christian theology. The question that a student of Religion (as distinguished from a participant in a specific religion) asks, though, is not one of veracity or sincerity, but one of function – not “is the Bible true?”, or even “what does the Bible mean?” but “how does the Bible function within a specific discourse and within a specific community?”.

I strongly recommend this book to people considering studying Theology and Religion: students in that discipline will have to be able both to consider the religious (or irreligious, or non-religious) tradition in which they themselves stand from the critical standpoint of an outsider, and develop ways to consider an empathetic understanding of the religious views of others. For many, this is a hard thing to do: to question that which you have been accustomed to accept at face value, and to break through the caricatures that often obscure what other people actually believe, can be a challenge. This is even more the case when what is to be questioned can be thought of as constitutive of one’s personal identity in some sense. If done as gently, intelligently, and wittily as John Barton leads one to, however, it can be stimulating, thought-provoking, and revealing.