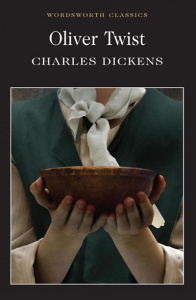 By Charles Dickens
Review by John (Classics and English)

What an excellent example of the power of dress young Oliver Twist was! Wrapped in the blanket which had hitherto formed his only covering, he might have been the child of a nobleman or a beggar; it would have been hard for the haughtiest stranger to have assigned him his proper station in society.

What captivates me about this novel is less the iconic narrative and more the narration itself.

By nature of an infant’s vulnerability, this novel ties itself with an exploration of domestic responsibilities. Through Oliver’s childhood he experiences as wide a range of domestic nurture as possibly imaginable. From the workhouse and Fagin’s lair to the protection of Mr Brownlow, the behaviour of many different groups of people is scrutinised and satirised. Thus, one aspect of Dickens’ novel is a social commentary, in turn using his own experiences (in a workhouse as a child) to create the fictional inhabitants of the novel. Nevertheless, there is also a constant element of fantasy, an imagination that lends itself to fairy-tale and melodrama. In the novel a balance is struck between an evaluation of Victorian society and a riveting fictional tale.

Paying particular attention to the deployment and depiction of handkerchiefs in this novel is crucial. They are a custom of the wealthy and a target for Fagin and the boys. Recent film adaptations emphasise the narratological importance of the handkerchief but, their symbolical importance as an ostentatious sign of manners and contrast in wealth that divides rich from poor is equally important. In a tragic embodiment of this, Nancy raises Rose Maylie’s white handkerchief, just before she is murdered, symbolising her ultimate defeat to circumstance.

For me, Dickens’ novel is moving because it rallies against societal stations. Some are allowed to leave, others, tragically, are not.