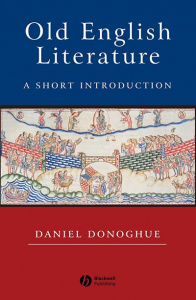 For me, one of the most intimidating aspects of the English course at Oxford was the prospect of studying Old English – the thought of working through the other periods itself was hard enough, but doing one in a completely different, unfamiliar language seemed terrifying! Faced with this possibility, one afternoon in a second-hand bookshop in my hometown I picked up a copy of Daniel Donoghue’s Old English Literature: A Short Introduction. What was initially complete chance, chosen with the hope of gleaning some insight into a culture which was completely alien came to form the foundation of my understanding about this topic – you can imagine my shock when the same book later turned out to be on my first year reading list.

Through his easily digestible prose, Donoghue provides a fascinating, detailed, yet easily accessible insight into the world of the Anglo-Saxons, bringing their culture alive with a detailed social commentary and literary critique that still resonates with a modern reader. The book is divided into five sections, each dealing with a different aspect of society; “The Vow”, “The Hall”, “The Miracle”, “The Pulpit” and “The Scholar”. Each of these chapters come together to create an extremely solid basis of the basic constituents of the Anglo-Saxon world, each a vital element to be considered when studying the literature of the period. This book introduced me to many of the texts I ended up studying during my first year, and was a resource to which I returned to again and again – it’s simplified, but critically intelligent analysis of the language used in Old English literature, along with the social background to the texts, was endlessly useful.

I read Old English Literature: A Short Introduction, before I started studying at Oxford, and found it an immensely helpful way to bridge the gap between school and university. It piqued my interest in a subject area directly relevant to my course in an engaging, relevant and understandable manner, and opened my eyes to the fascinating world of early British culture.