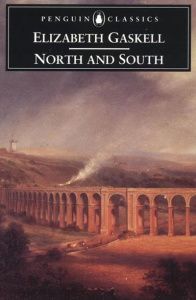 I chose to read Elizabeth Gaskell’s North and South book when I was around 16 having really enjoyed the 2004 BBC TV adaptation. I’m really glad I found this book because, while doing my A Levels, it complimented both my study of Victorian women’s rights in History, and extended my understanding of other Victorian novels I had read.

The novel was published in 1854 and is set in “Milton”, a fictional industrial town resembling Manchester. The narrative focuses on Margaret Hale, a strong-minded but incredibly caring protagonist, who moves from the south of England to the industrial north with her retired clergyman father and sensitive mother. With a judgement fixed by her idealisation of the south, we see her struggle to adjust to the harsh climate of an industrial town. It is through Margaret’s interaction with both the “Masters” who own the cotton mills and their workers – one of whom is the fiery leader of the workers’ Union who leads a strike – that Gaskell brings to life the industrial town. Through her reluctant exchanges with Mr Thornton, one of the more honourable (but still in Margaret’s eyes reprehensible), mill owners in Milton, learns gradually to abandon her southern-born prejudices.

North and South is strongest in its heartfelt presentation of both privileged and working-class characters: their passions and the suffering they experience. This book made me angry at the injustices which are so maturely depicted. The novel presents a nuanced view of both the rich and poorer classes. In this it sits in contrast to Mary Barton, Gaskell’s other novel set in a similar industrial northern town, where the “Masters” are predominantly inhumane tyrants. I found it really interesting to compare the differences between these two novels as well as comparing to the works of other novelists writing at a similar time such as Charles Dickens. Gaskell is a less well-known Victorian novelist, much less likely to be found on GCSE and A Level reading lists as Dickens or the Brontë sisters. Reading this novel, and thinking about it independently rather than with the direction of the school syllabus, helped confirm my love for this period of English literature. I even got to talk about it and the other Gaskell novels I had read in my Oxford interview! They asked me what books I enjoyed reading, and then challenged me to compare it to other Victorian industrial novels as well as less obvious comparisons such as the Tennyson poetry I had studied for AS level.

It’s still one of my favourite books – a thoroughly recommended read.