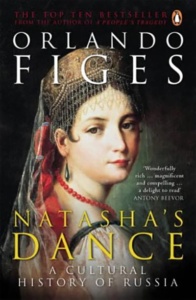 Figes’ epic work gives the reader an invaluable insight into the cultural heritage of Russia from the heights of autocracy to the depths of the Soviet Union. Published first in 2002, the book takes its name from a scene in a giant of Russian literature, Leo Tolstoy’s War and Peace, in which Natasha Rostova’s innate Russian-ness breaks through the veneer of enlightened European thinking she has acquired, highlighting the dual-nature of Tsarist Russian society. The complexities of Russian culture are not to be taken on lightly, but Figes successfully guides the reader through the forest of the great Pantheon of music, literature, poetry, art, and much more which form the cultural heritage of the world’s largest country. Without a clear introduction to the subject, it is more than easy to get lost in the openly contradictory world of a nation that sits simultaneously in Europe and Asia, but with the aid of this book, it becomes not only simple but thoroughly enjoyable. Figes encourages the reader to sample Tchaikovsky and Rimsky-Korsakov, Tolstoy and Gogol, all as part of one seemingly impossibly homogenous cultural tapestry. If not complicated enough sitting in two wildly different continents, the cultural history of Russia is again further complicated by the October Revolution and the impact of the subsequent dramatic regime change on the arts, and yet again the penetrating eye of the author enables one to slip effortlessly between the two without losing sight of the immense change it caused. Yet he does not encourage the reader to simply read his book as a beginning and an end of an involvement with Russian culture. Instead, Natasha’s Dance whets the appetite of the reader and encourages them to dive headfirst into the incredible, multi-faceted milieu that is the immense Russian cultural heritage. I began this book not knowing much more than what I had been taught in a Russian history module at A-Level, which also meant I brought with me what could be described as a moderate amount of confusion about Russia, its practices, and people. However, upon finishing this book I realised I had not only come to appreciate the apparent contradictions which had caused my confusion but that I had also, quite by accident, fallen in love with a culture that was so dramatically different to the one I knew and had grown up in. I reference encouragement to immerse oneself into Russian culture because, for me, that is the second key lesson I took from this book, and have since discovered books that have shaped my current view on life and the world as a whole. If you want an introduction to what is unarguably one of the most contradictory, confusing, yet fascinating cultures the world over then Natasha’s Dance by Orlando Figes is a wonderful place to start.