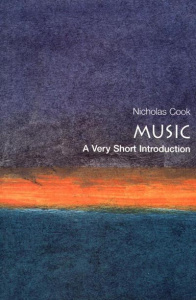 This snappy little read manages to bring together a whole host of ideas of what it actually means to read, study and understand Music. Let’s face it, professors of the study must sadly admit that Music is rarely considered as being an academic subject in its own right. And yet it’s automatically presumed that musicians are able to be successful without any prior knowledge of how music came into existence in the genres of the 21st century that we know today.

Well, prepare for this book to open a whole host of doors to explain some of the ideas that support Music as both an academic and creative subject. In just a few short chapters, Nicholas Cook lays out some of the basic questions of music study (What makes Beethoven so special? What does it mean to perform music authentically? What actually is music?) and tries to provide some explanations that actually make sense to a non-expert. The questions he unpacks to show music as a creative force in today’s society really make you think twice when you hear Justin Bieber’s Sorry for the umpteenth time on Radio 1.

Cook argues that Music as a subject requires a lot more thinking than simply practising scales or learning Classical “high art” music such as Bach or Beethoven. He calls into question the reasons for why national curriculums are so focused on studying this Western “art” music with little recognition of popular music or music from the other side of the world with its own notation system and cultural context. However, despite what sounds like a rather bleak outlook on the study of music, Cook manages to return to some optimism by explaining that ‘both music and musicology are ways of creating meaning rather than just representing it’ through its links to broader existence as part of our modern culture.

I’d have a dictionary to hand to help you decipher some of the weird academic words. But despite a few “brain fuzz” moments in a couple of chapters, this book gives a brilliant insight into what it means to study a subject that is as far reaching, creative and insightful as Music!

Nicholas Cook’s Music: A very short introduction is invaluable to any music applicant. Opening with a pace by pace analytical look at the music for an insurance ad, the book focuses on how music interacts with everyday life, as well as its function in academic study. Offering brief and understandable entrances to the various areas of music most frequently looked at in the discipline of academic music, the book provides multiple talking points for interviews, as well as a taste of how music is talked about academically. This is particularly useful in a discipline which before university, is mostly based on the practical elements such as performance and composition, along with relatively basic level analysis. Cook’s book introduces how music can be studied in terms of its historical context, both looking at how the development of music was impacted by contextual events, as well as the impact that music had and continues to have on society. This is perfect for anyone in any doubt, as I was, of whether or not to study music at a higher level. As someone torn between two subjects, Cook’s introduction to academic music was one of the key factors that helped me make up my mind, simply by making me excited about the ways in which music can be studied. Cook also provides reassurance for anyone afraid of being trapped in the Western canon of Classical music, looking at areas such as the influence of gender and sexuality of artists on pop music in the late 20th century. Whilst being both comprehensive and brief, Cook provides a perfect summary of the full potential of what a music degree can be, making the book both an informative and exciting read.