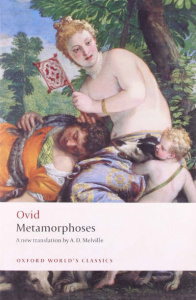 By Ovid
Review by Claire (Classics)

If you have any interest in literature, the ancient world, or just enjoy stories about people turning into trees, I would highly recommend that you read Ovid’s Metamorphoses. It may appear intimidatingly large at first, but the poetry is broken up into lots of smaller stories around the theme of transformation, and so it’s a brilliant book to read bit-by-bit around your school work. In my opinion it contains some of the most beautiful imagery in classical literature outside the Aeneid and Homer, and forms a wonderful introduction to Roman poetry which isn’t often included on school syllabuses.

On a lighter note, they are also wonderful stories about people changing into silly things, with people transforming into flowers, birds, and even a shower of golden coins in the case of Zeus. Ovid’s Metamorphoses is essentially the Roman love epic, using the same form as the Odyssey or the Aeneid, but to describe the crazy things mythological figures did when they fell in love. They also act as a slightly less rude introduction to Ovid than his Amores or Ars Amatoria. Reading some Ovid will always be helpful if you are looking towards a degree in Classics or Classical literature as Ovid is a key figure in ancient literature that you will likely have to study at some point.

From a historical point of view, the Metamorphoses are also interesting in that they were written during the reign of Augustus, the first true emperor of Rome, and thus reflect the mythology of a rapidly changing society. For all the funny stories in this book, it also reflects many more serious topics such as gender, the nature of power, and the power given to art in Roman society and mythology. If you can possibly read this book, you should!