The Life and Death of Anne Boleyn 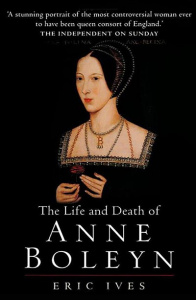 In his celebrated biography of one of England’s most controversial queens, Anne Boleyn, Ives explores the woman behind the circumstances of her execution. Older historians see her preoccupation with glamour as an example of her shallow nature, but Ives argues that we should instead see this as her way of manipulating her image in order to give a message, as well as manipulating the King himself. He argues her influence is far greater than we would assume from a queen consort, who normally took a back seat in court politics.

Anne Boleyn introduced Henry to evangelical books and preachers that greatly influenced his decision to Break with Rome, wanting not only the power but also introducing some evangelical ideas into the English church which he otherwise would not have been as open to. Ives also argues that she was the “destroyer of Thomas Wolsey,” a bold claim as Wolsey was the most influential adviser to the king before his fall, with some calling him “alter rex” or alternate king, so this shows the power which Ives believed she held over the king if she was able to topple a man so favoured.

Ives argues that it was the fact she held this much influence over the king that led to her downfall, causing other factions in English politics to unite against her with the excuse of adultery. However, there has been some criticism of Ives becoming too involved in Anne Boleyn’s life, calling her the “third woman in my life” which would imply favourable bias to the achievements of Anne Boleyn, with Ives unable to take a neutral opinion on her actions. This does not negate the fact that Ives’ complex and fascinating biography undoubtedly opens new avenues of thought on one of England’s most famous queens.