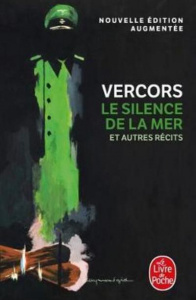 By Vercors
Review by Tally (History and French)

Reading in another language can be quite daunting at first; half the books I picked up had a much too advanced level of French and the other ones didn’t particularly interest me enough so spend my free time powering through. However, in the A/AS level course we studied the Nazi occupation of France, particularly about the resistance movement, and I noticed that in many of the films the book Le Silence de la Mer was referenced. It is a fictional book written under the time of Nazi occupation in France with a fake name encouraging the resistance. It tells the story of an uncle and his niece who are forced to take in a German soldier and explores the subtleties of passive resistance as opposed to the overt bombings that everyone learns about. The development of the character of the German soldier is also very interesting as it brings a human element to the occupation and generally to discussions of wars which are so often seen in terms of numbers of deaths and types of armies.

The actual French language is pretty simple and the book is not very long, so it doesn’t feel like an unmanageable slog to the last page. There is also a classic but very cheesy film adaptation with the same name directed by Jean-Pierre Melville in the 40’s which also gives a sense of the tone – the over-exaggerated movements can help with understanding if you read/watch them in conjunction. The Oxford French course is fairly literature intensive so getting used to reading in French from a book that’s not too hard and definitely interesting is a good place to start.