Is That a Fish in Your Ear? 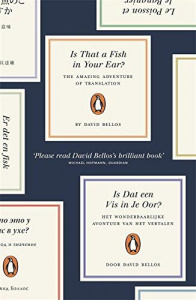 I picked up the book Is That a Fish in Your Ear? because of the title at a time when being told what to read for school was making me not really want to read at all. It was the first book that I ever underlined bits of- just because there were so many ideas and examples that were so interesting that they made me want to share them with other people or come back to them another time. The question Bellos’ book addresses is, essentially, what is translation, and how do we do it? Obviously I’ve never studied translation except for language exams (so I knew it wasn’t simple!) and I don’t study translation now, but this book probably helped my application and confidence in what I wanted to study more than any history book.

So why is a book about translation so fascinating, funny, and relevant? Other than the fact that it’s so easy to engage with, I think the answer is in the enormously rich use of anecdotes, examples and discussions of things that I would never have considered significant or amazing. For example, how would you subtitle a film to a non-western language where it is the interaction between the multiple languages spoken that conveys meaning quickly, rather than the words themselves- such as in the “Good Luck” scene (German, French and English) in The Great Escape? Why would intellectuals make an effort to incorporate foreign words into their own language, such as German speakers did in the nineteenth century? How would you translate “white as snow” to a culture that has never seen snow? What does the phrase “literal meaning” tell us about the historical power of written language? “Literal” comes from the Latin for letter- and a letter on its own doesn’t actually mean anything without other letters- so “literal meaning” is oxymoronic nonsense.

Translation seems to incorporate and influence so much across so many disciplines, and I think that this is a major reason I found this book so fascinating. It made interactions and connections where I’d never seen them before and made the subject of history- or of anything- seem limitless because of the capacity to look at it in so many different ways, rather than just in terms, for example, of a period like “the Tudors” or even a broader idea like “revolutions”. When I started reading this I wasn’t even completely sure what subject I wanted to study and couldn’t work out where to start with reading “history books”. This book encouraged me to think about what I loved to learn about and gave me a new way of thinking across subjects in a way that wasn’t restricted to A level teaching boundaries. I still dip into this book when I’m looking for either for inspiration or just something light to enjoy- amazing in a non-fiction book!