How to Manage Your Slaves 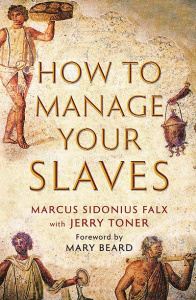 Slavery has always been a difficult and delicate topic of discussion in modern academic scholarship, however the crucial role it played in the Roman empire — permeating into every aspect of Roman society and culture — means that we cannot shy away from the harsh realities of the past, or we risk completely misunderstanding it and the institutions it relied on.

Structured like a step-by-step manual, or even a modern self-help book, How to Manage Your Slaves is a collaborative effort between the fictional Roman author Marcus Sidonius Falx and Cambridge University classicist Jerry Toner, aiming to educate you — the reader ­— on everything about Roman slavery.

At this goal it succeeds brilliantly. Not only is this book extremely well-researched, but its information is also easy to absorb, due to the thoroughly engaging structure of the book, reminiscent of something you might find in Terry Deary’s Horrible Histories books: every chapter centres on a different topic relating to Roman slavery (whether is where and how to buy slaves or how to set them free etc.) and the majority of this information is amiably narrated to us by our Roman nobleman, Marcus Sidonius Falx, whilst Toner provides a more traditionally academic commentary at the end of each chapter, clarifying everything Falx has said previously.

With Falx as our main narrator, we are constantly challenged in our judgements and perceptions of his character. On the one hand he is perpetuating and encouraging what we would consider today to be a morally repulsive institution. On the other hand, his narrative voice is outgoing, likeable and almost persuasive (as a Roman he obviously would see no moral fault in his keeping of slaves), and thus we gain a thoroughly engaging insight into the disturbingly casual Roman attitude towards slavery.

Toner has proven that rigorous academic research and entertaining literature do not have to be mutually exclusive, and I would recommend How to Manage Your Slaves to anyone looking for an accessible and engaging entry point into wider academic reading and scholarship on Roman society.