The Good Women of China 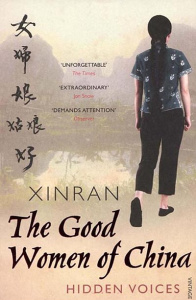 One book which I read before coming to uni that I found really interesting was Xinran’s The Good Women of China. Although it wasn’t for a school course or set reading as such, it turned out to be really helpful in my Oxford application: I wrote about it in my personal statement and it came up in one of my interviews, which I was very happy about! This is the book that made me particularly interested in gender history – if your school history course is anything like mine was, only a few female names are mentioned, compared to the hundreds of men studied in textbooks.

The Good Women of China is a book compiling various interviews that the author, Xinran, had been collecting, both while living in China and after her move to the UK. She speaks to women from different generations, areas, and classes within China, and allows them to tell a history which hasn’t been given due attention before. Many of the interviews are based on events which occurred during the Great Proletariat Cultural Revolution, which occurred from 1966-76 and is a really interesting period of history. Although it wasn’t too long ago, some events are almost unbelievable to contemporary Western ears, due to the complete anarchy which engulfed areas of china during this time. For example, one of the interviews is based on an earthquake which killed around 300,000 people but went unnoticed for weeks due to preoccupation with the death of Mao. It is impossible to imagine such a disaster happening without being noticed now.

The book is very easy to get into, with Xinran’s writing style very descriptive but not too heavy, and the fact that the book is comprised of multiple interviews makes it easy to dive in and out of, or to focus on sections which really interest you. If you are at all interested in social history, dictators or communism, then you’ll definitely enjoy it. Conversely, even if you are unsure about which types/eras of history you prefer, or whether you even like history at all, I’d still recommend the book. It assumes no prior knowledge of the context of the interviews, so if you have never studied China before, you don’t need to worry about understanding it. It is also a type of history (focusing on normal people rather than powerful historical figures) which isn’t really studied at school, and if you’re anything like me, you’ll probably enjoy quite a lot! If you want a book which is entertaining but still grounded in historical events, then this could be the one for you.