France: A History: From Gaul to de Gaulle 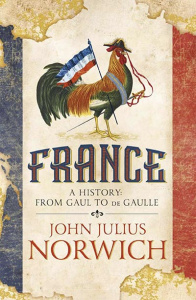 As I specifically chose this book to name it on my personal statement, I was not expecting to enjoy it or even finish it for that matter. However, I soon discovered that this book is hugely insightful and covers such a huge range of history that there is bound to be something in here that sparks your interest.  From Roman occupation to the glory of Charlemagne, the chaos of the French revolution and the resistance in World War Two, there is never a dull moment in this book!  It is packed full of heroes, villains, romance and war, so much so that it is difficult to believe some of the events in this book actually happened.

I was originally very interested in the French revolution and had previously read books primarily focused on that short, yet prominent area of French history. Therefore, I really bought this book for the purpose of understanding the events that sparked such an emotional and turbulent time in France’s history. Yet, unbelievably it was the medieval history in this book that really captured my interest because it was packed full of scandal and mystery, for example, Charles VI who suffered from delusions and psychosis or Louis XI who was also known as “The Universal Spider”. It really proves to a historian that despite the medieval period seeming so alien to our modern society sometimes there are areas to which we can relate, such as public interest in scandals, which magazines publish and profit from in the present day.

I would recommend this book as it might inspire you to explore different areas of history, which you may have never been interested in before.