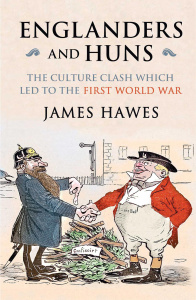 Both the appeal and the challenge of studying History at university is how different it is to the stuff you cover at school. While not quite a 1066 and All That recitation of kings and battles, most of the history I read – and certainly the history I enjoyed – was an old-fashioned political narrative, all good fun but not very sophisticated.

All this meant I would run a mile from anything hinting at “cultural” or “social” history; it bored me to death, and had a rather scary lack of the comforting dates and figures which string together an A Level essay. James Hawes’s Englanders and Hunsis not a condescending or pedestrian book, but offers a lively introduction to this daunting and alien world of culture and society by presenting one of the classic periods of staid diplomacy, the half-century before the Great War, as a clash of antagonistic cultures (England’s and Germany’s, in case you were wondering) rather than a duel of high politics.

Hawes uses the traditional framework of political history – Franco-Prussian War, Congress of Berlin, colonies, the Arms Race, etc. – as a canvas for a vivid portrait of popular attitudes in both countries. “Popular opinion” is something I’ve invoked in dozens of arguments without getting beyond hand-waving generalities, but Hawes’s use of the merchandise, cartoons, and in particular newspapers of the age both brilliantly illustrates and actually defines what this elusive “opinion” was. The vignettes and anecdotes normally the preserve of old-fashioned political narratives are used to great effect to colour the lives of the ordinary people who are the actual agents in this sort of history, and all to a fittingly radical conclusion on the cultural hostility of the Englanders and Huns by 1914.

Hawes’s book does credit to cultural history by not merely expounding its importance (there are plenty of dry tomes if that’s what you want) but exemplifying its value to an interesting approach and argument – by far the best route to dispelling any qualms about this new territory.