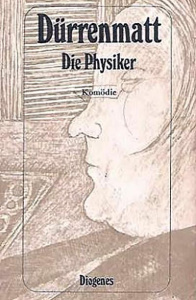 Out of the three books we had to study for our A-Level German literature paper, Die Physiker (The Physicists) by Swiss author Friedrich Dürrenmatt was the one I enjoyed the most. Written in the midst of the Cold War in 1961, we are introduced to three physicists who are patients in a mental asylum located in peaceful Switzerland. All three have been locked in by Dr Mathilde von Zahnd because they are convinced their true identity is that of Newton, Einstein and Möbius, the famous scientists. What sets off to be an absurd comedy where the themes of madness and scientific knowledge are intertwined slowly evolves to an even more absurd string of plot twists and revelations, as each character is not who they pretend to be and the real reason behind their detention is made clear. Despite the fact the book was in a foreign language, I found it accessible and captivating as it contained quickfire dialogues as well as characters such as nurses or police detectives who embody an almost stereotypical, hence amusing, type. I also remember discussing in class the way Dürrenmatt had aimed to write his play following the Greek playwright Aristotle’s three principles – namely that there should be a unity in space, time and action – in order to step away from the German drama conventions established by Brecht, who would include multiple plot lines and jump five years ahead in time over a page in his plays. Die Physiker is worth reading to try and understand the weight of scientific responsibility and the ethics behind, or simply to have a taste for contemporary German literature. Either way, I would recommend both the book and the film version of 1964 which makes the most of sound effects and visuals to offer an even more striking depiction of the patients’ odd behaviour in quite peculiar a place.