Death and the Afterlife in Ancient Egypt 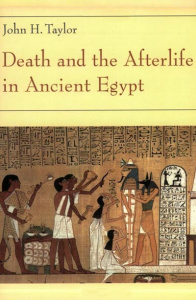 When most people think about life after death in ancient Egypt, funerary practices such as mummification and readings from the Book of the Dead come to mind. However, these practices merely scrape the surface of a much wider and complex religious system. John H. Taylor’s Death and the Afterlife in Ancient Egypt provides a perfect introduction to Egyptian religious philosophy and application that is comprehensive and accessible.

Taylor opens his book by addressing the uncertainty of death that has puzzled ancient and modern civilisations alike. The existence of a world external to our own is a debate that is fascinating and relevant to every human being. A unique aspect of Egyptology is the wealth of evidence that is available to us through surviving texts and images, as well as ornaments and archaeological sites. Taylor uses direct examples of these ancient Egyptian records, deconstructing them in order to illuminate the theological thoughts and attitudes of the ancient Egyptians. An example that stood out for me was a tomb inscription reading “O you who love life and hate death…” I had previously assumed that the Egyptians’ approach to death was entirely positive, as suggested by the lavish tomb decoration and the belief in an afterlife. Yet, this inscription reveals that the Egyptians feared death as much as anyone else.

Ultimately, Taylor’s book enables us to gain an insight into how the ancient Egyptians attempted to rationalise the concept of death. It also explores how religion was intertwined into the fabric of ancient Egyptian society, from mortuary cults to the integral role funerary preparation had in the Egyptian economy. Reading this book made me very excited at the prospect of exploring the rich legacy of this ancient culture at university, and has provided me with a basis of knowledge which I look forward to expanding at Oxford.