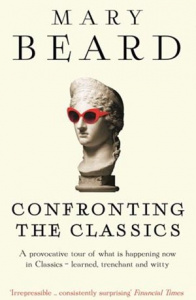 As a person who really wanted to study Classics at university, I realised didn’t know a lot about Classics at all. Classical books can be very intimidating – I felt like I needed to know everything! – which is why Mary Beard’s Confronting the Classics is such a good read. Having received it for my birthday, I began reading. I was determined to learn everything ever about my subject and finished certainly not knowing everything, but at least feeling like I did. Which was a good start.

It covers a good range of topics and some interesting situations – suggesting that the emperor Caligula appointed a horse as a consul for joke, for example, which makes the whole thing far more enjoyable to read than a textbook. There is a mix of more serious topics, some of which I referenced in one of my Oxford interviews, with some light-hearted ones,, such as the chapter right near the end entirely dedicated to the Asterix comic. Beard is a fantastic and accessible writer, which is incredibly important when learning about a topic for the first time – you want to be informed, but you also want to enjoy what you’re reading!

However, what I found best in this book is that it didn’t simply give you information – it explored and challenged ideas, and again and again it justified the importance of Classics to the modern world. In a world where people are constantly asking “what are you going to do with your Classics degree?”, that’s an incredibly important thing.