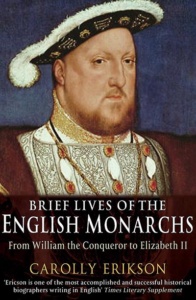 One of the main reasons I love history is that there are so many true stories that sound like a fantasy. This book delves into every monarch’s rule, from King Edward II, who was killed by his wife who cheated on him with a red-hot poker, to Richard III, who coldly killed two of his nephews, in order to claim it all for himself. It fascinates me how the different methods of leadership can so drastically change the course Britain as a nation takes — under a king like Henry II the kingdom thrived and owned a larger portion of France than the French, but under the weak leadership of Henry VI, a mentally unstable king who was easily swayed, chaos ensued, and the War of the Roses began. The author takes into account all the different factors that made the leader the person they were and suggests potential influences that gave the monarch the views and skills they had and cause the long-lasting changes they did. I particularly enjoyed reading about the rules of Henry VI and Edward IV because it intrigued me how the leaders of the opposing houses had such opposite characteristics — you have the weak King Henry VI versus the charismatic, strong, powerful Edward IV, who took on the fight against the Lancastrians following the death of his father, Richard Plantagenet