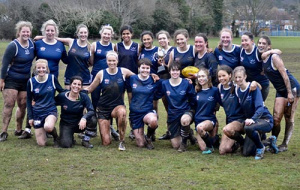 On Saturday 10 March, four Univite WCR members participated in the Australian Rules Football Varsity matches. While the men have been playing for over a century, 2018 marked the first time that there has been a women’s Aussie Rules Varsity. Univ was well represented in the historic encounter, fielding three players – Nina Yancy, Miranda Gronow, and Emilie McDonnell. It was a riveting match that ended in a draw – 7-7.

Earlier in the day, Mitch Robertson represented the men’s team, who were defeated after a close and hard-fought match 34-28.

College now has its very own…