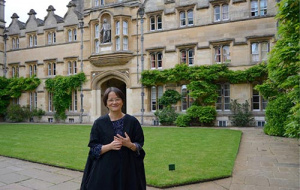 The paper, “Broad and strong memory CD4+ and CD8+ T cells induced by SARS-CoV-2 in UK convalescent individuals following COVID-19” was published in Nature Immunology on 4 September 2020. The results are a joint effort from Medical Research Council Human Immunology Unit at the MRC Weatherall Institute of Molecular Medicine and the Chinese Academy of Medical Science Oxford Institute at the University of Oxford.

Professor Dong’s group is playing an important part on aspects of the University response to COVID-19 which has represented an enormous research effort bringing together clinicians and scientists across the University. This has already resulted in significant impacts, with many more to follow. There has been major interest in T cells, which form part of the immune system, as they potentially provide clues to how the body defends itself against SARS-CoV-2, the virus that causes COVID-19.

What are T cells?
While antibodies latch onto and destroy disease-causing agents like viruses and bacteria, T cells latch onto diseased cells within the body, such as tumour cells or virus-infected cells. Fragments of viral or tumour protein displayed on the surface of affected cells (called epitopes) act like waving a flag to the T-cells, showing them where they are needed. Having found the affected cell, the T-cells surround and then kill it, to stop the problem spreading further. T-cells also produce small proteins (called cytokines) that attract other immune cells to the area and help coordinate other aspects of the immune system, including the production of protein antibodies that can help coat viruses to destroy them.

What is immune memory?
Inside our bodies, there are billions of T-cells that are in a constant battle with viruses. When we feel the symptoms of a cold or flu, it is often because the virus has the upper hand. When the symptoms start to subside, the body has managed to produce enough T-cells to keep the infection under control. In their early development, T-cells become “trained” to only recognise a particular virus, tumour, or other foreign invader. Once established, the trained T-cells can last many years in some cases, and can respond more rapidly if the same challenge is encountered again – this is part of immune memory.

Immune memory of past infections means that at any time there are many different trained T-cells in your blood at any one time. In order to study how the immune system reacts to a particular virus or tumour, researchers need to be able to pick out the relevant virus-specific T-cells from millions of other T-cells, which is what has been done in this study.

Why do T cells matter for COVID-19?
It is becoming clear that antibodies to SARS-CoV-2 can decline after infection. This is often seen during a normal immune response as the body clears the infection and returns to a healthy state, prepared for future infections. It may be that T cells are longer lasting than antibodies, and so could offer an alternative method to diagnose whether someone has had a past COVID-19 infection, after antibody levels have waned. T-cells also provide clues about how people recover from infection and whether they may play a role in determining if someone has a mild or more severe illness. This information could also shed more light on vaccines and treatments.

What does the research show?
The Oxford researchers led by Professor Tao Dong show that individuals who had recovered from COVID-19 had high levels of T cells that respond to the virus.

Professor Dong notes “it suggests that the T cells might have been important in the recovery of those individuals, and also suggests that the recovered patients have a memory response which might help give them some ongoing protection, alongside other parts of the immune system, such as antibodies.”

The researchers identified parts of the SARS-CoV-2 virus which are preferentially recognised by the T-cells. This will be useful for other researchers around the world who will be able to build on the data through studying similar T-cells from patients in different regions. The study showed that individuals with different levels of COVID-19 disease severity had differences in the type and extent of T cell response to the virus, which could provide insights to the nature of immune response needed for protection. The researchers found that the “spike” protein of SARS-CoV-2 was often recognised by T-cells from recovered patients, which adds support for the approaches used by many of the current vaccines in development, including the Oxford vaccine. Such an understanding also helps inform the development of future diagnostic tests, and supports further developments in new treatments.

Does the research suggest that re-infection is unlikely?
The researchers are currently investigating how long the T-cells which recognise SARS-CoV-2 can last, and how this relates to antibody levels over the longer term. It is difficult at this relatively early stage to be sure of the likely length of protection.

How does the work fit into other Oxford COVID-19 research and wider work?
Oxford researchers have come together in an enormous effort to understand COVID-19 to help patients. These activities include vaccine studies, clinical trials, diagnostics, epidemiology, contact tracing and studies of the immune system. Samples have been generously provided by patients and are being studied using an array of the latest technologies to gain as much information as possible from the work. All of the data are shared, so that large numbers of clinicians and scientists can bring their respective skills together, and quickly apply that knowledge for patient benefit. Professor Graham Ogg Interim Director of MRC Human Immunology Unit who co-led the study said that, “such a large co-ordinated response has brought enormous benefits in terms of scale and capability, which will have lasting benefits for patients worldwide.” The work also fits well with wider UK national studies, including ISARIC and the UKRI Cellular Immunology Consortium. Graham added, “this has been a monumental effort from so many people, compressing what usually takes many years into just a few months, and showing the effective collaborative firepower that can be harnessed by UK science.”

What are the next steps?
The researchers are continuing to work hard to identify other parts of the SARS-CoV-2 virus that are recognised by T cells and to study much larger numbers of patients over time. Professor Tao Dong who led the research, said “by studying the T cell immune response in depth and breadth, we will begin to build a better understanding of why some individuals develop milder disease, and how we might be able to prevent or treat infections.” In addition, she noted, “the work will also support the development of alternative diagnostic tests to complement existing antigen and antibody-based testing.”