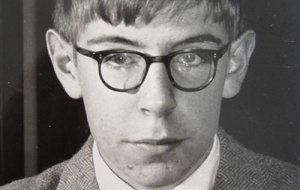 It is with great sadness that College notes the passing of Professor Stephen Hawking – Univ OM (1959, Physics) and Honorary Fellow.

Professor Hawking’s tutor at Univ was Robert “Bobby” Berman, who was Physics Fellow from 1955-83. As noted in Kitty Ferguson’s Stephen Hawking: His Life and Work, Berman observed of Hawking: “It was only necessary for him to know that something could be done, and he could do it without looking to see how other people did it.” 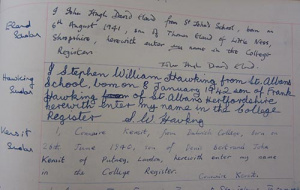 Perfectly summing up Hawking’s early genius, Berman also said: “I taught Stephen in his first year; in his second and third years he taught me”.

Hawking was also an active and enthusiastic member of University College Boat Club, where he coxed. He maintained a keen and lifelong interest in Univ and returned here on numerous occasions, including a visit in 2016, when he met with a small group of our current Physics students.

His daughter, Lucy, was also a Univite (1989, Modern Languages), and together with her father they wrote a number of highly acclaimed children’s books on Science.

Our thoughts are with his loved ones at this time, and a full obituary will be published here in due course