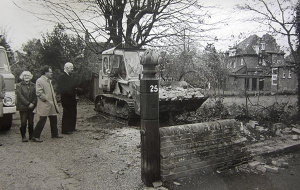 With Lord and Lady Redcliffe-Maud

The College deeply regrets to report the death of Sir Maurice Shock, who died on Saturday aged 92. Sir Maurice had been our Politics Fellow from 1956-77, and our Estates Bursar from 1958-73. He was elected an Honorary Fellow in 1985.

After serving with the Intelligence Corps after 1945, Sir Maurice read PPE at Balliol, getting a First in PPE, and then did postgraduate work at St. Antony’s. He was briefly a Lecturer at Christ Church and Trinity, before being elected Fellow and Praelector in Politics at Univ in 1956.

As a tutor, Sir Maurice helped strengthen Univ’s fine reputation for the study of PPE, but as Estates Bursar, he transformed the appearance of the College. On our central site, Helen’s Court, the Goodhart Building and the Mitchell Building were all created on his watch. He once reminisced to the Archivist about the origins of the Goodhart Building. The back of the Examination Schools was rather grim, and needed covering, and in front of it stood an antiques gallery, with a workshop on the top. At a time when Arthur Goodhart was growing frustrated at the slow progress in the plans to create Helen’s Court, Sir Maurice remembered taking him to the top of the workshops, showing him the view from there, and suggesting that this could be a good site for a new building. The Master’s imagination was caught, and that moment, Sir Maurice thought, was the germ of the Goodhart Building. 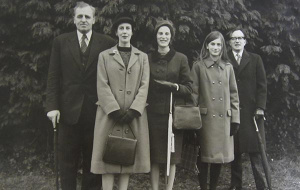 With his wife and daughter, and George and Pat Cawkwell to the left

Elsewhere in Oxford, he took the difficult decision to sell the College’s property to the north of the Old Parsonage Hotel (now the University’s IT centre), and invest instead in some properties in north Oxford on which he oversaw the start of the building of Stavertonia. Now that the Univ. North project is starting to take shape, we can be grateful to Sir Maurice for laying the foundations of the College’s north Oxford estate.

Sir Maurice retained a lifelong affection for Master Goodhart, once describing him as a second father to him. When the Goodharts were living in the penthouse suite on the Goodhart Building in their later years, and finding it rather difficult to cook for themselves, having rarely had to do so, Sir Maurice and his wife would regularly bring them suppers.

Outside Univ, Sir Maurice played a significant role in University affairs. He was Treasurer of the Oxford Union from 1954-72, and he served on the Hebdomadal Council from 1969-75, but perhaps his greatest contribution to Oxford was to serve on the Franks Commission of Inquiry into the University from 1964-6.

Sir Maurice left Univ in 1977 on being appointed Vice-Chancellor of the University of Leicester. However, he returned to Oxford in 1987, when he was elected Rector of Lincoln College. He retired in 1994. He was knighted in 1988. His wife Dorothy predeceased him in 1998, and he leaves a son and three daughters, to whom the College sends its deepest sympathies.

A Service of Thanksgiving will take place at 2.30pm on Thursday 26 July in Balliol College chapel. It will be followed by a reception at Lincoln College (at approximately 3.45pm), in the Grove. In the event of bad weather the reception will be held in the Langford and Oakeshott rooms at Lincoln.

We have received a number of tributes and memories of Sir Maurice from Univ Old Members. A selection of them are included below.

“I shall never forget Maurice’s lecture on Gladstone and the Sudan!”
Professor Herman Bell (1956, Oriental Studies)

“Sir Maurice Shock was my superb politics tutor 1957-1960, and later Rector at Lincoln when my son was there. I was very lucky to have Sir Maurice, Sir Peter (Strawson) and Professor Thomas Wilson as my three main PPE tutors when I was up – what a distinguished team!”
Ian Berry (1957, PPE)

“Maurice Shock was my Politics Tutor and had a profound effect on my life. I will be forever grateful to him.”
Paul Gambaccini (1970, PPE)

“Maurice was a delightful Politics tutor at University College, Oxford. Asking where I was going after Oxford, I responded that I had been granted a scholarship to the London School of Economics. Maurice responded: ‘Oh, that academic factory’. His posting to Leicester amused me.”
Professor Michael Jefferson (1959, PPE)

“I did tutorials with Maurice Shock in 1956-57 and 1957-58, and remember him well — his smile, attitude, and dress. He endowed me with an enduring interest in British politics, and a lifelong admiration for William E. Gladstone. He referred to himself often as an ‘Oxford bird’ with a ‘perch’ at Univ.”
Professor Martin C. McGuire (1955, PPE)

“I thought him the very best of tutors and was immensely fond of, and grateful to him. Both before and after Oxford I led a life of political activism, and I carried Maurice’s wisdom and learning with me.”
Andrew JM Murray (1971, PPE)
Rhodes Scholar Rhodesia 1971
Senator for Western Australia 1996-2008
Commissioner – the Royal Commission into Institutional Responses to Child Sexual Abuse 2013-2017

“Maurice Shock was a very gifted and very engaging teacher. One of his favourite strategies was to encourage his pupils to build their thoughts on each topic around one central point. On one memorable occasion he invited the Univ PPE class of ’63 to identify the central point of nineteenth century Irish history. We made various suggestions (Religious division between Protestant and Catholic? The system of land tenure? Neocolonial government? The rise of Irish nationalism? …) but he gently resisted all of them. Finally, as we lapsed into baffled silence, he threw himself back in his armchair (nearly overbalancing completely), whipped off his spectacles and in triumph announced ‘Potatoes!’.”
Terence Wilkerson (1963, Philosophy and PPE)

If you have a memory of Sir Maurice Shock that you would like to share with the Univ community, please send them to communications@univ.ox.ac.uk