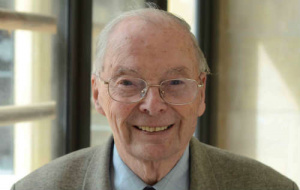 Brian was Supernumerary Fellow and later Hammerson Tutorial Fellow in Plant Science from 1970 – 1992 and thereafter an Emeritus Fellow. He was a very successful and popular Dean of Graduates from 1973 to 1988, then later Dean of Degrees from 1999 until 2011. Brian was a stalwart supporter of the Univ Music Society, and of many College sports teams. He was a much loved Fellow in the College who will be remembered by generations of Univ students with respect and affection.

Brian’s funeral is likely to be held in late November and all who knew him will be welcome.

Our thoughts are with Brian’s family and his many friends.

A tribute to Brian by his friend and colleague, Dr David Bell, Emeritus Fellow of Geology, can be read here.